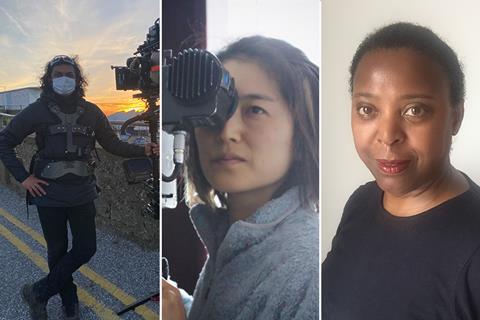 There are reasons why productions turn to people they have worked with before when it comes to crewing up - time, money and trust. But always working with who you know is one of the reasons why the industry remains less diverse than the audiences it serves.

That is why ScreenSkills, the industry-led skills body for UK screen, created Film Forward. The programme is designed to help productions extend their network of experienced Black, Asian or minority ethnic professionals. The aim is for the successful candidates to gain practical experience in their chosen department working alongside a more senior colleague so they have direct experience of the demands and challenges of the senior role and can apply with greater confidence for future positions at that level.

A cohort of candidates with at least five years’ experience in a variety of below-the-line roles from sound design to costume and edit to production office has been recruited and are now available for placements which ScreenSkills can subsidise thanks to National Lottery funds awarded by the BFI as part of its Future Film Skills strategy.

For Manchester-born Lorene Dewett, whose credits include Been So Long, The Virtues and Save Me, the programme came at exactly the right time.

She graduated from a master’s degree in editing at the National Film and Television School (NFTS) earlier this year. “The challenge now for me lies in the fact that people from ethnic minority identity backgrounds statistically are just not being hired to cut the top studio feature films, and that’s where I want to go with my career.”

The programme recognises the barriers to progression, but also provides a mechanism to address them, she says. “I’ll be placed on a film production to work alongside a more experienced editor. So they would still have their usual editor in place, but at the same time the production would be opening their network to me so that I can learn from their editor and also build new film industry connections.”

“As the programme expands in the future, there will also grow a network of Film Forward ‘graduates’ working at the highest level…[who} can also in turn help to shape the industry into becoming more ethnically diverse.”

Mari Yamamura, a UK-trained Japanese cinematographer with credits including Belonging and 1 Day, is also looking forward to shadowing a DoP “to observe and soak up how it all works on a bigger-scale feature film production”.

She studied art and design before film and regards that training as fundamental to what she now wants to do. “I was happy to take the long route coming through the ranks because it allowed me to observe works of distinguished DoPs in the field. I am now eager to go back to my roots as an artist and focus on improving my skills as a visual storyteller,” she says.

“When I started out, feature film and TV drama were two separate communities and I didn’t have many opportunities to work on feature films. This is why I am particularly pleased to be accepted on the Film Forward programme.”

Akhilesh Patel formerly worked as a cameraman in news and current affairs in conflicts including Afghanistan, the Ukraine and Middle East before taking Steadicam training and moving to commercials, pop promos and shorts. ”Through all those years I secretly harboured dreams of working in cinema,” he says. “My news career was an adventure - there were quite a few times while working in war zones I came close to losing my life. I felt it was the right time to take another type of risk and transition into drama and fictional storytelling.”

He hopes Film Forward will give him the chance to learn from the best in the business. “The experience I gain from working with an experienced A camera operator on such a placement will help me be more confident in my own abilities and help me achieve my goal of being an A camera operator.”

Gareth Ellis-Unwin, ScreenSkills head of film and animation, says: “We understand there are often time and budgetary pressures on productions that may lead them to stick with hiring the people they know. So we have made it easier for them to extend their networks to a greater diversity of talent and we trust they will want to work with this great bunch of film professionals.”