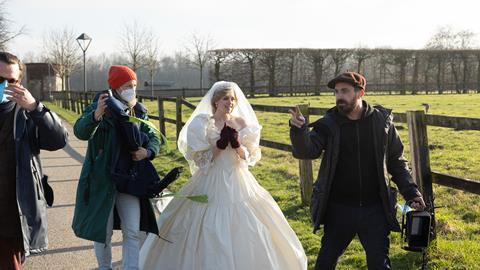 Pablo Larrain’s suffocatingly intense psycho-thriller Spencer is not your mother’s royal family period drama — although the Chilean filmmaker, renowned for looking at institutions through a glass darkly, rather hopes it will be to the liking of his parent.

“I wanted to make a movie that my mom would like,” says the director of his latest film, which imagines what went through the mind of an alienated Princess Diana — played not by a Brit but US star Kristen Stewart — during three days over Christmas with the Queen et al at Sandringham in 1991, when “happily ever after” was firmly in the rearview mirror of her lonely, decade-long marriage to Prince Charles.

Film and TV accounts of life behind the royals’ velvet curtain have often defaulted to conventional, restrained tones. But the “upside-down fairy tale” from Larrain, director of No, Jackie and Neruda, dispenses with all that in an admittedly empathetic portrait, yet one that pulls no punches and plays out to Jonny Greenwood’s splintered, off-key score. Think Jackie — Larrain’s 2016 Venice premiere starring Natalie Portman as grieving first lady Jackie Kennedy in the aftermath of JFK’s assassination — but edgier.

Embedded with the family, Stewart’s unnervingly familiar Diana is a shadow of herself: all gasps and darting, doleful eyes as she skives off dinners and hunting parties. In private, she lurches from intimate moments with her sons and an enamoured female servant to darker episodes: Diana’s bulimia in full force as she hunches over a toilet bowl; Diana surreally gobbling pearls from her necklace; Diana transfixed by visions of a miserable royal wife from centuries ago, Anne Boleyn.

At time of writing, it was unknown what Señora Larrain made of Spencer. Larrain says she “had not loved” most of his films, believing them to be “too dark or too difficult”, particularly early works such as Post Mortem and Tony Manero, which addressed the horrors of the Augusto Pinochet regime that swallowed up Chile from 1973-90. “So with my brother [producer and Fabula co-founder Juan de Dios Larrain] it was like a little bit of an internal revenge, to try to see if she would connect.”

The chances are she will have been engrossed. Diana’s death in a car crash in Paris in August 1997 resonated with millions around the world. “I’m not sure I would have made this movie if I hadn’t done Jackie first,” says Larrain. “I felt there was a chance to make a movie about someone that, even though I am Chilean and grew up here, exists in the collective memory. [Diana] was so relevant for my mother in terms of the things she had to go through, her fashion.”

Larrain and his brother had been exploring an idea about Diana and discussed it with UK producer Paul Webster and German partners Komplizen Film. They hired screenwriter Steven Knight, who arrived at a story that — like Jackie — compressed everything into several intense days. “If Jackie is a movie about memory and grief, this movie is about identity and motherhood,” says Larrain.

The director wanted to explore the persona of the enigmatic global icon. “Prince Charles found this young, naive and beautiful woman but she was interesting and strong,” he notes. “The entire planet watched their wedding and they had their future in front of them and then it just doesn’t work — like a lot of us, I’m a divorced man. The fairy tale becomes broken and turns upside-down. It’s the end of the dream but at the same time it’s the reality for millions as well. So that’s when we can connect and relate.”

After Covid-19 delays, Spencer shot in Potsdam, Germany (doubling for Sandringham) and on location in Norfolk, England, in early 2021. The film opened in the US in November via Neon and after three weekends had crossed $6m while grossing more than $5m from its early international run in territories licensed by FilmNation.

“I never did more than four takes,” the director says. “I usually do long takes, so it’s the whole scene, and I don’t do pick-ups. There was an incredible equilibrium on the set. We were working with some of the very best English actors and every one of them, [and] Kristen, would know not only their lines, but everyone else’s lines. It was another level of precision. I would have shot that movie for another two months, easily. It was such a joy to make it.”

Larrain says rehearsals are not his style unless he is doing theatre or opera. “For movies I have the fear that you’re in rehearsal and something happens that isn’t being captured… We talked a lot and read with Kristen and her dialect coach [William Conacher]. I talked a lot with Sally [Hawkins] and Sean [Harris] but I’m not a rehearsal person. There are filmmakers like Mike Leigh that rehearse for ages and make masterpieces, so there are many ways to make a movie, but that’s not my case.”

Larrain learned on Jackie not to complicate matters when the cameras were rolling, and applied the lesson to Spencer. “I had the luck to work with Natalie [Portman]. When an actress is right on the spot and has reached the balance, what you need is to be very precise with your words and not be overwhelming. Sometimes directors can talk more than needed. You film just enough to be able to put together the movie, and not ask for more and more takes that are unnecessary. [So] during the production of Spencer, I decided not to interfere too much.”

Having worked in English on several productions, including Stephen King mini­series Lisey’s Story for Apple TV+, the Chilean filmmaker is unfazed by the language and says, regardless of budget or dialect, it all ends up being “an actor in front of the camera”. In fact, he sees only upside. “When you work in English, the movies become more expansive and they can reach larger audiences. I wish my native language Spanish would be able to do that… It’s the materials that may be different. Stephen King’s mind or the Kennedys or the royal family — those things can be complex, maybe for me because they’re further from my culture, so it’s more of a cultural challenge than a language one.”

In recent years Larrain has shifted his focus away from overt commentary on the Pinochet regime, yet a fascination with the impact of power­ful institutions remains as seen in Neruda, The Club, Jackie and of course Diana’s increasingly fraught behaviour in Spencer. The filmmaker insists he is not making a statement about the royal family itself.

“I’m a Republican and I defer to [British] culture on the decision about whether they need their family or not. It’s not anti-any­thing. It’s more about [Diana] and her perception and the oppression coming from the institution that is trapped on the wheels of tradition and history.

“It’s always possible to basically walk out of there, just get the kids, get in your car and drive away.”