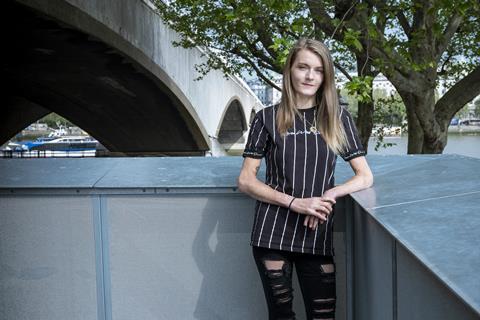 When Dirty God casting director Lucy Pardee first contacted Vicky Knight about playing the film’s lead role — a young Londoner dealing with the aftermath of an acid attack by her vengeful ex-boyfriend — she was met with extreme reluctance. Knight was eight years old when one third of her body was burned in a fire. As an adult, she participated in a TV documentary she had believed was about her coping with her burns but, when aired, went out under the title Too Ugly For Love.

“They completely humiliated me,” recalls Knight, who is from London. “When Lucy emailed me about this film, I was like, ‘No way, I’m not doing anything like this again.’ It took them a whole year to get hold of me and convince me.” After Knight met Pardee, events moved apace. Dirty God’s Dutch director Sacha Polak quickly offered her the part.

Knight, who works as a healthcare assistant in a hospital, had no previous acting experience, and Polak created a supportive structure: drawing on some of her star’s real-life experiences for the story, allowing her to improvise dialogue, and involving her in key casting decisions so she would have an authentic connection with supporting characters. Knight’s own burn scars are mainly to her body — she wore prosthetic make-up to add scars to her face.

The actress says she found the experience cathartic: “It saved my life, in a way. Before, I didn’t want to live with my scars any more. I was self-neglecting. I wasn’t going to work. I was spiralling out of control. This movie gave me a new window to look out of. I can finally say I feel like a human, and not a creature.”

Knight recognises future roles might require a different discipline, but remains undaunted. “I would love to carry on acting,” she says. “I’ve finally found something that I’ve really enjoyed doing.”