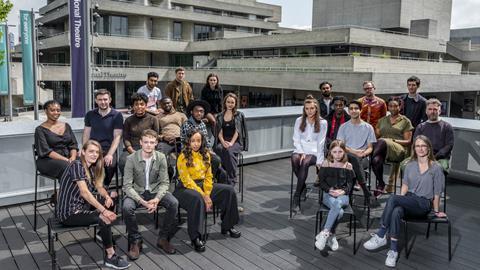 Screen International has unveiled Stars of Tomorrow 2019, its annual, eagerly anticipated talent showcase of the most exciting new actors, writers, directors, producers and heads of department emerging across the UK and Ireland.

In the midst of the international production boom, fuelled by the rise of the streaming platforms and the associated demand for emerging UK and Irish film and TV talent, Screen International is thrilled to announce the 2019 Stars of Tomorrow.

With the industry demand for fresh talent as strong as ever, Screen International is also permanently including heads of department this year to be celebrated alongside the featured actors, writers, directors and producers. All of the 2019 Stars of Tomorrow are ready to make their mark on the industry.

In the 16 years since its launch, Screen International’s Stars of Tomorrow showcase has identified a bounty of new UK and Irish talent at the very beginnings of their careers, including future superheroes (Benedict Cumberbatch, 2004), flying nannies (Emily Blunt, 2004), mothers of dragons (Emilia Clarke, 2010), rocketmen (Taron Egerton, 2014) and Russian assassins (Jodie Comer, 2016), to name only a few.

Stars of Tomorrow editor Fionnuala Halligan determines the line-up after reviewing hundreds of candidates, and consulting with experts across the industry including talent agents, casting directors, managers, directors and producers. Twenty-two actors and filmmakers and five heads of department have been selected for 2019.

This year, Stars of Tomorrow moves back to its original launch date in the summer, and is supported by partners including ScreenSkills, the Casting Society of America, Filmarket Hub and BFI London Film Festival along with venue partners Hotel Café Royal and the BFI Riverfront. This year’s Stars will be celebrated at a reception on July 11 at the Hotel Café Royal.

Stars of Tomorrow editor Fionnuala Halligan said: “Every year it seems impossible that I’ll encounter as much raw talent as the last but each time I look I find even more fresh faces with so much to say. Reading about the class of 2019, it’s easy to get excited about the diverse array of talent about to grace our screens. I feel certain that the British and Irish film industries will be lively and inclusive in their hands. If these are the Stars of Tomorrow, then the future is looking good.”

Screen International editor Matt Mueller said: “UK and Irish talent is in more demand than ever throughout the international film and television industries and Screen International is proud and delighted to present this annual showcase of the fresh new talent coming through as selected by our indefatigable Stars of Tomorrow curator Fionnuala Halligan. Kudos to Finn for her tireless efforts all year around in tracking the best and brightest new talent out there, and huge congratulations to our 2019 Stars of Tomorrow. We can’t wait to see the impact they bring in their chosen professions.”