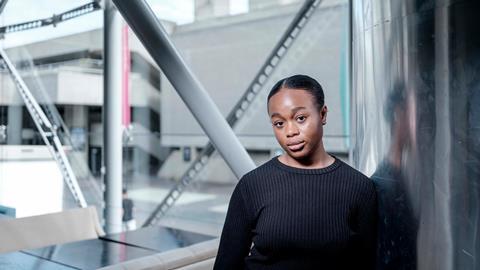 Like her partner on Rocks Kosar Ali, Bukky Bakray was flung fast into the public eye this year: her very first role netted her the Bafta rising star award, voted by the British public. But what next for the 18-year-old? Bakray has knuckled down to work, that’s for sure. She filmed a supporting role in BBC four-parter You Don’t Know Me, directed by 2017 Star of Tomorrow Sarmad Masud (My Pure Land) and starring 2019 alumni Sam Adewunmi, shortly after the Bafta ceremony. “I learned a lot about the nature of TV,” says Bakray of the series, co-produced with Net­flix. “I was excited to practise what I learned from that job.” Further upcoming work includes a supporting role in Apple TV+ series Liaison starring Vincent Cassel.

After filming Rocks in the summer of 2018, she returned to school to study for her GCSEs, and did not tell anyone but her closest friends and family about the experience. Since then, apart from auditioning, she has taken part in the Royal Academy of Dramatic Art youth company and has been accepted to several drama schools. “It would be a disservice to the craft to not do some kind of training,” Bakray says.

She describes winning the Bafta as being like a “Marvel post-credit sequence” on her experience with Rocks. “I was already grateful for the place I was at. I didn’t realise people were cool enough to vote for me,” she says. “I’m in the zone where I want to learn and better myself and work with more sick people. The Bafta has reinforced that I’m in this industry, but I still have work to do.”

Bakray, who had no previous professional acting experience, was picked for Rocks by director Sarah Gavron and casting director Lucy Pardee after an unorthodox audition process involving multiple workshops with east London schools. She believes the bonds formed during this period helped the eventual cast members to secure their roles. “The friendship between me and Kosar, it became very real.”