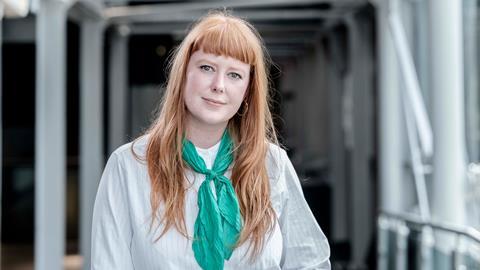 It is just nine years since Grace Snell started out as a costume trainee on Ridley Scott’s Prometheus. In that time, she has built an impressive career as a costume designer across shorts (including Aneil Karia’s 2017 Bafta-nominated Work), features (Joanna Hogg’s The Souvenir and its sequel The Souvenir: Part II; Bassam Tariq’s Mogul Mowgli) and TV (Ed Lilly’s upcoming eight-part supernatural series The Rising for Sky; Billie Piper’s I Hate Suzie).

It has been something of a whirlwind for Snell, who grew up in coastal Norfolk and moved to London when she was 19 to study costume interpretation at Wimbledon College of Arts. “At that stage I didn’t realise I wanted to be a designer,” she recalls. “I just knew I wanted to get a practical skill.”

A chance meeting with costume designer Suzie Harman (45 Years, The Death Of Stalin) while Snell was working as an assistant on a commercial led to some work experience, which opened her eyes to the possibilities of a career in the field. “I always had an interest in fashion, but I was adamant that I didn’t want to be in the fashion industry,” she notes. “I realised that costume was much more exciting, allowing me to collaborate directly with story and script.”

That desire to be actively involved in a diverse range of narratives is what motivates Snell. “I always go in with an open mind, and I try to change genre or period on every project,” she notes. “I got Mogul Mowgli because I knew nothing about Muslim culture. I was ready to throw myself into the research, spend every single day learning and listening.”

Now, Snell wants to use her knowledge and experience to help up-and-coming costume designers, and is building a practical training programme. “It’s not just about the creative aspects, it’s also about being a head of department,” she explains. “There’s no classes you can take in that. I’ve had to learn along the way how to support a team, and how to manage people. I’m proud that I’m now in a position to share my experience and support the next generation of costume crew.”