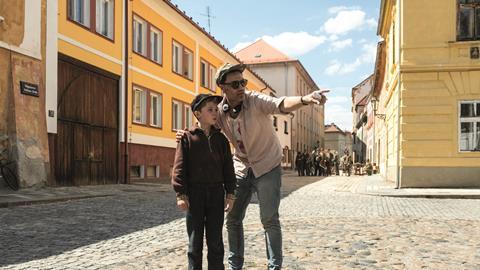 Pitching Jojo Rabbit’s odd mix of humour and Hitler was a no-go, so Taika Waititi wrote the screenplay on spec to really sell his vision.

Taika Waititi will have his mother to thank if Jojo Rabbit wins big this awards season. For she recommended he read Christine Leunens’ 2008 novel Caging Skies, from which it is adapted. “We often hang out and talk about what we’re reading,” reveals Waititi on the phone from Los Angeles. “She’s a schoolteacher, so she is often recommending me books.”

This was back in 2011, pre-What We Do In The Shadows, Hunt For The Wilderpeople and Thor: Ragnarok, when Waititi was best known for his Oscar-nominated short Two Cars, One Night and second feature Boy. He optioned Leunens’ book with his own money and wrote the script on spec, making wholesale changes to the material with the author’s blessing.

“I loved the spine of the story, about this boy in the Hitler Youth who finds this girl in the attic, so I took that part of it,” he explains. “The book’s really dark and the relationship is really cool, so I added my style to it, the humour. And the imaginary friend. That’s not in the book either.”

Ah yes, the imaginary friend, a caricature Adolf Hitler played by Waititi himself who, as with Boy, once again presents a difficult and sensitive subject — in this case the Holocaust — from a child’s perspective. Just don’t call it a comedy about Hitler.

“He happens to be a character in a drama, that happens to have some jokes in it,” insists Waititi. “And that was the key. That was the focus of the entire film. Not to make a comedy. But that’s always been my style. Boy, would you say it’s a comedy… about child abuse? How do you pitch that? I’ve never really been able to sell my films in a one-liner. You can’t say, ‘It’s Mission: Impossible with homeless kids.’

“So going into it, I knew it was going to be tough. That’s why I didn’t bother pitching the film, because you can’t open your pitch with, ‘It’s about a little boy in the Hitler Youth…’ You’ve lost them. And if you say, ‘Don’t worry, it’s got jokes in it,’ you’re dead. I decided to write the script and let that do the talking. That was really the first indication of what the tonal balance was going to be. And I’m glad I did that, otherwise I’d probably still be walking around Hollywood going, ‘Don’t worry, guys, it’s got jokes in it.’”

Needless to say, the script made quite an impression when it arrived in Hollywood executives’ inboxes, winding up on the 2012 Black List as one of the year’s best unproduced screenplays. “Most studios were, ‘We love the script. It’s great. No idea how to make it,’” he says. “This was 2011, 2012. We were still in that time where, just to make a period film, you needed a big name to bring in the money and the box office. But just as we started having those conversations, I got pulled away because What We Do In The Shadows got financing, so Jemaine [Clement] and I went back to New Zealand to make that. And it was going to be a very quick process. ‘I’ll bust out this vampire mockumentary then I’ll get on to this…’ Three. Movies. Later. I end up finally going, ‘OK, I really want to make this.’”

Waititi was in post on Thor: Ragnarok when Fox Searchlight — one of the studios to express interest back in the day — came calling. “It was nice timing. They said, ‘Look, we’ve always loved the script. We want to make it, with one proviso. We’ll only make it if you play Hitler.’ It was pretty weird and they basically blackmailed me into doing it.”

Clearly it was a compromise that Waititi was willing to make in order to get his film funded? “Not really. My ego loved it, but on paper it doesn’t make any sense. If you look at me, which I do all the time in the mirror, I’m a brown New Zealander with a giant mop of curly hair. I’m definitely not on the top 100 list of people who would play that character. But I think they thought, because I’d written it, I knew exactly what I wanted. Also, if you gave that role to an A-lister, like a giant celebrity, it would overshadow the heart of the film. It would just become the ‘George Clooney Hitler movie’, and that would be the only thing on the poster.”

As it is, Waititi is on the poster, dressed as Hitler, lurking between co-stars Roman Griffin Davis and Stephen Merchant. And it’s a get-up that has already become the stuff of cinematic legend, on account of Waititi wearing it while directing. “But that’s what I do in all my jobs,” he jokes, before turning serious. “It’s not that it was a painful experience, it was more of an embarrassing thing to realise, ‘I need to have a deep conversation with someone about their character and I’m dressed as the biggest arsehole in human history.’ So yeah, giving direction dressed like that is a massive bummer.”

Every cloud, they say, has a silver lining. Or, in this case, a golden one. Following its premiere at Toronto International Film Festival, Jojo Rabbit picked up the festival’s coveted audience award, which in recent years has proved a useful barometer for Oscar success: three of the last 10 winners went on to win the best picture Oscar, most recently Green Book.

Waititi, who is in pre-production on Thor: Love And Thunder, is humbled and thrilled by all the Oscar talk. “You don’t make films for awards, but when it’s part of that discussion and people are talking about it, and there’s this buzz, well, it’s really nice to be wanted. That’s basically what all film directors want. We want to be liked, we want to be wanted and this feeds that wolf. We all say, ‘We don’t make movies for this,’ but man, it feels good to be part of that conversation.”