Rising screenwriter Sam Steiner talks to acclaimed writer/director Clio Barnard about creative processes, approach to character, the role of improvisation and the contested notion of ‘authenticity’ in filmmaking. 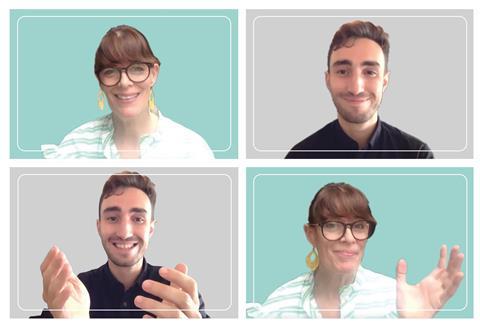 Manchester-born Sam Steiner has a natural affinity with Clio Barnard: his background is as a writer of stage plays; her debut feature, documentary hybrid The Arbor, investigated the life of late Bradford playwright Andrea Dunbar.

Barnard’s latest feature Ali & Ava, starring Adeel Akhtar and Claire Rushbrook, premiered earlier this year in Directors’ Fortnight at Cannes, and she is in post-production on her television debut, Apple TV+’s The Essex Serpent. Adapted by Anna Symon from the Victorian-era 2016 novel by Sarah Perry, the six‑part miniseries is produced by See-Saw Films and stars Claire Danes alongside three former Stars of Tomorrow: Tom Hiddleston (2008), Jamael Westman (2018) and Dixie Egerickx (2019).

Yorkshire-born Barnard, who began her creative career as a visual artist, is also director of The Selfish Giant (2013) and Dark River (2017).

Sam Steiner: I adored Ali & Ava. It was a film that hit me at exactly the right time.

Clio Barnard: As bleak and as difficult as the last two years have been, I think we’ve seen a lot of kindness and collective social cohesion among some people.

Steiner: Sometimes we think it’s more profound to be dark or nihilistic, there’s a sense that you’re telling the truth if you’re being pessimistic about people. So often it’s more true when people surprise you with their kindness and willingness and compassion. I think that’s true in your films, even your first three films, which all feel like kind of tragedies to me. They seem to end on notes of real kindness and tenderness.

Barnard: That’s good to hear. I hope they have some kind of connection between people. You have to be careful you don’t end with false hope, because you smell it a mile off. It’s important to me to craft something that feels truthful but allows for possibility once it’s ended, for those people you’ve just spent the last hour and a half with. You feel they’ve got a future ahead of them. With The Arbor, those were real people’s lives and there is a real responsibility. With fictional characters obviously it’s different but I still think it’s important to honour them.

Steiner: How do you go about forming a character that’s based on someone you’ve met?

Barnard: So with Ali, for example, there’s a guy called Moey Hassan who is an actor, he was actually in The Arbor, who lives in Bradford. Like Ali, he’s a landlord of Slovakian tenants who are the tenants that you see in the film. I spent a lot of time with Moey and interviewed him and recorded some of our conversations. Adeel [Akhtar, who plays Ali] listened to some of those recordings, then I interviewed Adeel in character as Ali, and then we workshopped. For the character of Ava, Rebecca Manley, who plays the mum in The Selfish Giant, knew a teaching assistant named Rio through making that film. Me and Becca chatted to Rio, she’s become a good friend, and then we did workshops which she came to. Involving the real people in the process of developing the scripts, having the actors meet the people who have inspired who they are playing. It was a similar process on The Selfish Giant.

Steiner: At that point, would you have some of the script or is it more improvisation and playful recreation?

Barnard: With Ali & Ava, I had an outline, and the actors did a lot of improvising around loose scenes, and then I’d go away and write. I’d go to Bradford and talk to Moey and Rio and also Kamal Kaan, who’s a writer based in Bradford, who took me to particular places in the city that he wanted to see on screen.

Steiner: Ali & Ava feels like a more playful and positive film for you. Was that the intention?

Barnard: Yes, I wanted it to be a love story. I wanted it to have lots of music in it. Adeel is funny, he can’t help himself, so I knew it would have humour in it. I did want to do something that was deliberately optimistic.

Steiner: How is The Essex Serpent going? Does it feel quite different doing TV rather than a feature?

Barnard: It’s good but it’s intense. It’s been like shooting a six-hour film and editing a six-hour film, so you need stamina. Which, it turns out, I have! I’m really pleased, I didn’t know that going in. I loved working with all the actors and wrangling that much material and finding what happens to each of those characters through those six hours.

Steiner: This is the first time you have directed another writer’s work. How have you found that experience?

Steiner: How often do your films change in the edit, structurally?

Barnard: Every time. Some more than others. With The Arbor, the structure was completely different on paper. There was a script of sorts and in the edit we turned it into a chronological story — at script stage it wasn’t. The editor Nick Fenton thought it would be stronger to do it that way. The opening of Ali & Ava was also quite different to the way it was first scripted.

Steiner: Do you sit down and write some kind of outline when an idea takes root?

Barnard: Yes, it’s usually a two-pager. That might start as 10 pages of nonsense [laughs] and then I get it into a state that I can send to somebody else to read. I also want to ask you lots of questions. I don’t know if you have this feeling, but usually it feels like there’s something tugging at me and I don’t quite know how it’s going to manifest, or where it’s going to lead me, but it’s something that won’t let go. What about for you?

Steiner: Yes, I think so. I have scraps of ideas all the time, and most of them are nothing, and there are all kinds of things that you get excited about for five minutes and then they go away. The ones that you keep thinking about are the ones that are gnawing at you. So after the immediate rush of thinking, “This could be good,” the ones that stick with you are the ones I trust more.

Barnard: I like that thought of an idea you “trust”.

Steiner: You have to pour so much into it. Sometimes I feel like I work on something and realise it wasn’t trustworthy or it was a bit glib or a bit thin. But really you want something that feels whole or mysterious in some way.

Barnard: I like a line of inquiry that I want to go down. It’s quite a long process. It’s two years minimum, I’d say, developing a script that I’m happy with. That’s also meeting people and watching and reading and thinking about it.

Steiner: You said in an interview once that you are suspicious of the word “authentic”. Why? Because it feels to me like there’s such an authenticity to your characters and how they interact and the worlds you create.

Barnard: Without wishing to sound like a wanker [laughs], I think realism is a bit of a fairytale. It’s something we all want but it’s out of our reach, or it will always be manipulated in some way. I’m not saying manipulation is a bad thing; I just think we have to be wary of it as an idea. In The Arbor, that’s partly what I was trying to explore. This is how Andrea Dunbar saw that experience, this is how Lorraine [Dunbar] sees it, this is how the sister sees it, they will all have different ways of telling that same story. All the time you’re receiving a story, you have to question who is telling it and why. That’s why I’m wary of that word. Authenticity can only ever be an aspiration.

Steiner: What is your preparation for going into a shoot?

Barnard: I always find pre-production quite fraught. There are bits of it I enjoy — I love casting and I love the surprises that come through casting. In Ali & Ava for example, Sofia had been written as a boy and then Ariana Bodorova walked in and she was just brilliant. So we changed that character to a girl. Finding locations is always tricky. I’m always relieved when you’re up and running and shooting.

Steiner: I read that the first few drafts of Dark River were originally set in France, where the novel is set. Why did you change it to Yorkshire?

Barnard: My process in a way was about rooting it in the lives of real people. I met a lot of French farmers, but I felt I couldn’t communicate in the way I needed to in order to ground it in the reality I wanted.

Steiner: That strikes me as a moment of self-knowledge as an artist: “This is who I am, and that’s okay.”

Barnard: That’s a good way to put it.

Steiner :There is a brilliant Flannery O’Connor quote that I love, which is something like, “The writer can choose what he writes about but he cannot choose what he is able to make live.”

Barnard: That’s brilliant. I’m going to write that down.