What are the most successful 18-rated films in the UK? 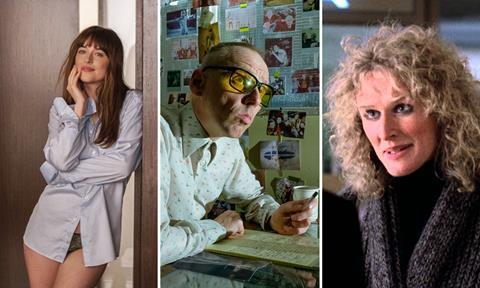 T2 Trainspotting and Fifty Shades Darker, both released this year, have become two of the highest-grossing 18-rated films of all time in the UK.

Fifty Shades Darker, after making the second-highest debut ever for an 18-rated film, has now reached $27.7m (£22.69m) in the UK. It’s now the second highest-grossing 18-rated film of all time, moving ahead of Basic Instinct, Fatal Attraction and The Wolf Of Wall Street.

Meanwhile T2 Trainspotting has made $20,901,570 (£16.9m) after four weeks and is now tenth on ComScore’s all time 18-rated list, pulling ahead of Pulp Fiction, The Departed and the original Trainspotting.

The number one film on the chart, running since the 18-rating was introduced in 1982, is Fifty Shades Of Grey on £35m, far ahead of its sequel. See below:

The story is different however if you take the above chart and adjust the box office numbers for inflation (using data from the Bank of England).

Adjusted this way, Fifty Shades loses its 18-rated crown and T2 Trainspotting falls out of the top 20. See below:

The top 20 adjusted for inflation

Admission figures would be an even better guide to the relative popularity of 18-rated films, however, there isn’t data covering the whole period (1982-2017) from one source.

So, while adjusted for inflation numbers aren’t perfect (they don’t take into account above inflation ticket price rises, for example), they reveal some interesting deviations from the all-time top grossing list.

For example, in the adjusted chart, 1988 Michael Douglas/Glenn Close thriller Fatal Attraction is the most popular 18-rated film of all time in the UK when it actually comes to admissions.

Other gory thrillers from the 80s and 90s that were more popular than their unadjusted numbers suggest include The Silence Of The Lambs, Basic Instinct and Seven.

According to the data, Martin Scorsese (perhaps unsurprisingly), is the most consistently successful director of 18-rated films, with three entries on the list (Cape Fear, The Departed and The Wolf Of Wall Street).

The number of 18-rated films has declined steadily since the rating was introduced, according to the BBFC.

With Fifty Shades Darker still in cinemas, expect it to potentially climb up both these charts in the coming weeks.