Why Screen Scotland is increasing its support for TV production

With global demand for content on the rise, Screen Scotland has launched the Broadcast Content Fund to support Scotland’s TV production sector. 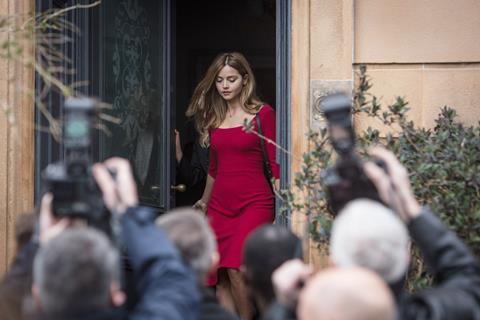 Screen Scotland, the new name and identity for Scotland’s unique public sector and industry partnership, is ramping up support for TV projects with the launch of its Broadcast Content Fund.

Dedicated to development and production funding for broadcast projects by eligible Scottish production companies, the fund aims to help the sustainable growth of Scotland’s broadcast production sector, encouraging the development of new projects, the scaling up of already established activities and the production of commissioned programmes.

With an allocation of $3.9m (£3m) for the 2018/19 period, the fund will prioritise projects with the potential to build companies of scale, reflect or promote Scottish culture, creativity and diversity, as well as projects that offer significant opportunities to people under-represented in the screen sector.

Funds will be allocated on a project-by-project basis, with development cash repaid only if a project goes into production. Production awards will be an equity investment, recouped pro rata and pari passu with other third-party investors.

The fund has also set up a “locked box” mechanism similar to the one used by independent film producers. This means any money the fund recoups for its investment has a corridor to go to the producer to be used for more development, production or staff training.

Screen Scotland’s senior screen executive Robbie Allen says now the fund is live, the real work starts: “There is a perfect storm of opportunity and a changing market means there is huge opportunity for Scottish broadcast content producers.”

The potential for broadcast content — spanning content for broadcast and streaming — is bolstered by a buoyant UK-wide marketplace and an uptick in potential international partners.

The Broadcast Content Fund accepts applications for all genres of broadcast content — including streaming, factual and scripted programming — where there is a clear and demonstrable need for public funding.

Working closely with high-profile industry representatives, Screen Scotland has identified the need to shoulder some of the financial risk in TV content development. It is an area the new fund will target in its first year in Scotland.

“We have to put more into development,” says Allen. “It’s about priming that nursery slope of development in the hope that the quality comes out at the other end and creates more demand for the content coming out of Scotland.

“The fund will push a lot of the money into broadcast and streaming content development in the fund’s first year as companies, commissioners and producers get used to working with it.”

The fund recognises there are different approaches to development across different genres. Scripted content producers have a similar model to indie filmmakers — they take an idea, some underlying material and put together a package with a writer, create scripts and put together a series bible to try and get broadcaster interest.

In contrast, companies developing entertainment, factual and specialist content tend to throw a lot of ideas at the wall and see which one sticks. Naturally, broadcasters only pay to develop the ones that stick.

“We will listen to companies and work with them to enhance their development capabilities,” says Allen. “We will ensure that the offer across development and production is appropriate, flexible and focused solely on their success and the success of the wider sector.”

Claire Mundell, creative director of Glasgow-based film and TV production powerhouse Synchronicity Films, says it is boom times for international television drama and the demand for content shows no signs of waning.

“It is about grabbing that opportunity. Having a fund that can enable you to take advantage of the opportunities is great,” says Mundell.

The Cry is set in Scotland and Australia, and chronicles the collapse of a marriage in the aftermath of a tragedy. The four-part, 60-minute-per-episode drama is adapted for the screen by Jacquelin Perske from the novel of the same name by Helen FitzGerald. Australian-born novelist FitzGerald is a British citizen who now lives and works in Scotland. It filmed for five weeks in Melbourne and another five in Glasgow.

“All the growth I know that Screen Scotland wants, the Scottish government wants — it all begins with producers and production companies. Retaining the IP in Scotland means all those decisions are being made here, not outside of Scotland,” says Mundell. “Ultimately that’s what we need if we want to have serious continuous growth and sustainability.”

Sarah Brown, executive producer and head of drama for Glasgow-based STV Productions — which is bringing high-profile Scottish legal drama The Victim, starring Kelly Macdonald, John Hannah and rising Scottish star James Harkness, to the UK and beyond — says Screen Scotland’s new support of TV is very welcome at a time when there is such a high demand for content.

“There is more TV being made because there are so many more platforms, so many more buyers for TV,” says Brown.

The Victim is a courtroom crime drama set within Scotland’s unique legal system. The story is told through the contrasting viewpoints of both the plaintiff and the accused. Directed by Niall MacCormick, whose credits include The Long Walk To Finchley, and created and written by Rob Williams, who made his name with Amazon’s The Man In The High Castle, The Victim shot for 10 weeks entirely in Scotland.

“It is a particularly exciting time for scripted content north of the border,” Brown says. “The wind is at our back.”

With an increased commitment from both the BBC and Channel 4 to commission out of the nations and regions, and the rise in deep-pocketed streaming services such as Netflix, Amazon, YouTube and Apple TV, as well as the cable giants led by HBO and Starz all looking for content, Scottish storytelling is highly covetable in the UK and internationally.

Both The Cry and The Victim are dramas commissioned by Piers Wenger, controller of BBC Drama, and Charlotte Moore, director of BBC Content, and will roll-out on BBC1. Both shows are majority financed by the BBC and commissioned for the nationwide network.

Back for the future

The Cry and The Victim received support through Creative Scotland. (Prior to the set-up of the Screen Scotland partnership and the creation of the new fund, Allen and the team provided development and production support for high-end scripted dramas via Creative Scotland’s production growth fund and its film development coffers.)

The projects also both qualified for the UK tax relief for high-end television series budgeted at more than $1.3m (£1m) an hour.

Brown describes Creative Scotland’s support as “incredibly helpful” to The Victim. The series is financed by the commissioning broadcaster, the BBC, Creative Scotland funding, the UK tax break and a distribution advance from the nascent Sky Vision, which officially launches at MIPCOM.

The Victim received Creative Scotland backing once it was greenlit. “At the latter stages, Creative Scotland were offered the opportunity to invest in the production financing of the project and I’m very pleased to say they came on board and joined the BBC, Film Victoria and our distributors DRG as another financier,” Mundell explains.

The Cry is majority funded by the BBC and distributor DRG, as well as the UK tax relief and a tax incentive from Film Victoria in Australia.

“[The Cry] is the first drama commissioned for the BBC’s nationwide network partially set in Scotland whose IP is owned by an independent production company based in Scotland,” says Mundell.

Because of The Cry, Mundell’s Synchronicity now employs five people, which she says is a previously unthinkable number of staff for an independent film producer in Scotland.

The Cry and The Victim are high-profile examples of where and how far Scotland’s broadcast and streaming content creation can go. Screen Scotland aims to build capacity, ensure there is more content from Scotland and more cultural programming from the country on network television, streaming platforms and available to audiences around the world.

“Building and growing the industry from the inside out,” is how Allen puts it.