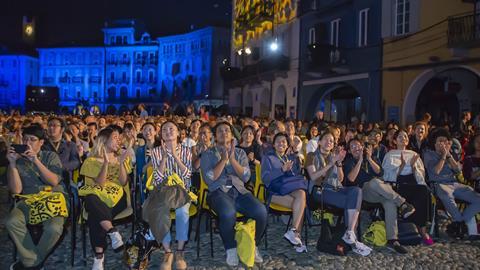 An Open Doors screening in Locarno

The initiative is an integral part of Locarno Film Festival’s Locarno Pro industry strand and is aimed at encouraging co-productions between Switzerland and France, Germany and Italy.

The shortlist was selected from a record 75 submissions this year. “We were delighted with the quality and the sheer number of entries received,” said Alliance 4 Development project manager Francesca Palleschi.

The producers and filmmakers of the nine projects will participate in three days of pitching and one-on-one meetings with potential partners from August 6 to 8.

Brazil’s Maria, who received the Cannes 2020 label for his debut feature Memory House, will present his new project Bandeira. It is produced by Justin Pechberty at Paris-based Les Valseurs with Rodrigo Texeira and Lourenço Sant’Anna at Brazi’s RT Features on board as co-producers.

Swiss projects include Swiss-Rwandan director Mbabazi’s debut feature Spectrum, which recently participated in the Torino Film Lab’s Script Lab. The Geneva-set tale revolves around the relationship between a Cameroonian artist who arrives in the city as an exchange student and an eccentric sound engineer in the midst of a personal crisis. It is produced by Gabriela Bussmann and Yan Decoppet at Golden Egg Production.

From Germany, Florian Hoffmann is presenting The Time Of Monsters about a young nurse from a poor background who emigrates to Cameroon in 1914, when it was under German colonial rule. The everyday violence she encounters destroys her hopes of a better life and also changes her view of the world forever.

The Italian projects include Giulia Di Battista’s The Hunting Season, an adaptation of the graphic novel Stagione di Caccia by Emiliano Pagani and Bruno Cannucciari.

The Locarno Film Festival is due to run  August 4-14 this year.