Other winners include a film about the early years of Greenpeace and US documentary 3½ Minutes, 10 Bullets. 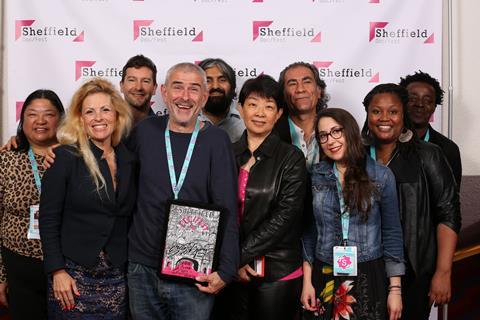 Acclaimed British documentary filmmaker McAllister, whose credits include The Liberace in Baghdad and The Reluctant Revolutionary, shot the feature over four years.

It follows the plight of one Syrian family as they are forced to leave the war torn country and the impact it has on the family’s relationships. During the filming process, McAllister himself spent time in a Syrian jail when the authorities seized his camera.

On behalf of the jury, Ruby Chen of CNEX China said: “The jury were enamoured by this Bergmanesque portrait of a relationship and love, taking place against an ever-changing and tumultuous backdrop.

“Delivering unusual gender portraits it explores vulnerabilities, looking at the concept of belonging, providing a unique and intimate portrait of disillusionment.”

The awards, presented by comedian Jeremy Hardy, were announced this morning at The Crucible Theatre, Sheffield.

The Environmental Prize was awarded to Jerry Rothwell’s How to Change the World, a Canada-UK co-production that centres on the early years of Greenpeace.

Speaking for the jury, Sagafilm’s Margret Jonasdottir said: “The strength of mind and willpower of the filmmaker to recapture and recreate the archive was poetically echoed in the film itself.

“From powerful images of protagonists standing arm-in-arm in front of a moving ship, cracking through the ice, to a man prepared to handcuff himself to the fruits of the harvest at risk of his life, gave meaning to how hard it is to change the world.

“And yet the film dealt with both success - the mind bomb - and with ultimate failure. The complicated relationships were captivatingly Shakespearean, a powerful dramatic narrative of how individual passion is transformed into organisational activism.”

A special mention went to Landfill Harmonic, about a rubbish picker and a music teacher in South America begin to make instruments from materials scavenged from the heart of a dump.

The jury said it was “an inspirational, emotional and passionate film recalling the power of music to raise its protagonists above and beyond their physical circumstances: living in a landfill susceptible to floods.

“Strong characters in this longitudinal study demonstrates the tenacity of the human spirit is overcoming the impossibility of their circumstances.”

The US-Brazil-Norway-Paraguay co-production was co-directed by Brad Allgood and Graham Townsley.

The Sheffield Youth Jury Award was given to US documentary 3½ Minutes, 10 Bullets, directed by Marc Silver.

The film centres on an encounter which lasted three and a half minutes, in which a middle aged white man repeatedly fired into a car of unarmed black teenagers, after they refused to turn down their rap music, killing teenager Jordan Davis.

Speaking on behalf of the six-strong youth jury, Maia Kelly said: “Out of a very strong and diverse category we agreed there was a clear winner, the film we chose tackled themes of race, youth, and injustice, with real power, depth and emotional resonances.

“It is a film that is not only politically significant, but valuable as a work of cinematic art. It examined one of the key issues of current affairs: how structural inequality is intuitionally enshrined in global society.

“By transcending news journalism, the film allowed us to empathise and connect with those framed as minority groups. The film is not only profound in its exploration of court proceedings and legal battles, but also in its use of cinematography and aesthetics.”

The film previously won the special jury award at the Sundance Film Festival in January.

The Student Doc Award went to UK film Archipelago, from director Benjamin Huguet, which jury member Daisy Fili of the London Film Academy said was “a rare, empathetic view of whaling focusing on self-sustainability within the Faroe Islands community”.

The Short Doc Award was given to Starting Point, made by Polish director Michal Szczesniak.

Sheffield Doc/Fest’s Interactive Award went to Clouds Over Sidra, a US project from directors Gabo Arora and Chris Milk that took viewers into the Za’Atari refugee camp in Jordan. A special mention was given to Do Not Track.

The In The Dark Audio Award went to The Woman on Ice, a Danish production by Rikke Houd, Third Ear.

The Tim Hetherington Award, presented to the winner by by the late photojournalist’s mother Judith Hetherington, was announced at the UK premiere of Cartel Land at Doc/Fest on June 6, to its director Matthew Heineman.

The award celebrates the legacy of Hetherington, whose objectives as a filmmaker were to highlight the plight of people often ignored by mainstream media. He was best known for documentary Restrepo, which he co-directed with Sebastian Junger and won the Grand Jury Prize at Sundance 2010. Hetherington died while covering the 2011 Libyan civil war.

Doc/Fest’s Audience Award will be announced on June 15.