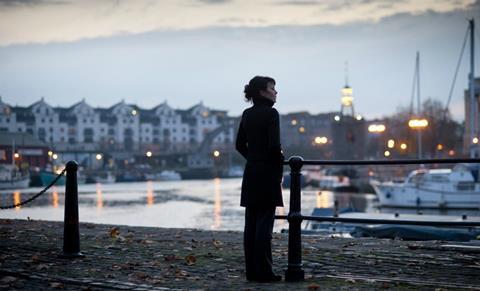 Professional reserve crumbles in the face of an overwhelming romance in Flying Blind, a modest but absorbing, low-budget first feature from director Katarzyna Klimkiewicz that unfolds with a cool poise. Maintaining a sense of mystery throughout a trim running time, it could repay enthusiastic interest from a domestic distributor but will seem equally at home on the small screen following a world premiere at the Edinburgh International Film Festival.

The film carefully surrenders its secrets whilst maintaining enough notes of ambiguity to leave viewers intrigued about the truth of the matter.

One of the pleasures of Flying Blind lies in the strong central performance from Helen McCrory (Hugo, Harry Potter etc) as brilliant, fortysomething aerospace engineer Frankie. McCrory shines in a rare leading film role as a woman whose confident sense of control over her life and work proves to be a flattering illusion.

She exudes a steely professionalism and blithe indifference to any suggestion that her willingness to serve the military industrial complex demands at least some ethical qualms.

A chance encounter with young Muslim student Kahil (Najib Oudghiri) leads to a passionate romance in which Frankie grows to believe she can have it all from thriving career to mysterious young lover. The audience is encouraged to assume that Kahil is too good to be true, an impression that seems to be confirmed when it is revealed that he is not a student.

Set in Bristol, the film is crisply shot by Andrzej Wojciechowksi and the intelligent screenplay by Naomi Wallace and Bruce McLeod carefully surrenders its secrets whilst maintaining enough notes of ambiguity to leave viewers intrigued about the truth of the matter.

Screenplay: Naomi Wallace and Bruce McLeod based on an idea by Caroline Harrington