Jake Gyllenhaal’s committed performance as Boston marathon blast victim Jeff Bauman in Stronger is generating awards heat. The actor tells Screen about the challenges and rewards of stepping up to produce the film. 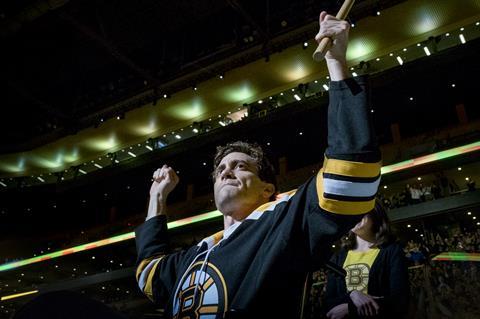 Though Jake Gyllenhaal played the lead role in Stronger, a drama about real-life Boston bombing victim Jeff Bauman, he seems more excited to talk about his role as a producer. “I’ve put two-and-a-half years of my life into this movie, far beyond the performance of it,” he tells Screen International. “I’ve learned more about myself producing this film and about the film industry than I ever learned before. I’m more proud of it than anything else I’ve ever made, as a result.”

Stronger is the first release from Nine Stories, the production company he founded with Riva Marker in 2015. With projects already lined up with the likes of Luca Guadagnino and Denis Villeneuve, the actor admits this side of the business comes easily to him.

“I grew up in a world of filmmakers, so there’s a real understanding of the process of casting, financing and location scouting,” says Gyllenhaal, the son of a director (Stephen) and a screenwriter (Naomi Foner). “I didn’t grow up understanding the side of the actor. They were always these strange beasts who were brought onto the island at the last minute; I felt much more familiar with the creation of the film as a whole. I revel in the restless, continual failure with small triumphs that is producing.”

In 2013, 27-year-old Bauman lost his legs below the knee in the terror attack at the Boston marathon. A working-class Boston local who was at the marathon to win back his girlfriend Erin (played in the film by Tatiana Maslany), he became famous firstly for Charles Krupa’s graphic photo of him after the blast, then for his honest account of his rehabilitation in his memoir Stronger, co-written with Bret Witter.

Gyllenhaal was interested in the role even before Bauman’s memoir hit the bestseller lists. Todd Lieberman at Mandeville Films bought the rights to the story, and an early version of the script by John Pollono found its way to Gyllenhaal. He explains: “I called Erik Feig at Lionsgate and said, ‘I love this role,’ just as an actor at that point. They said, ‘Let’s find a filmmaker first and we’ll come back to you.’”

Lionsgate picked the versatile David Gordon Green (George Washington, Pineapple Express). He was keen on Gyllenhaal, but financing started to slip, reportedly because it clashed with fellow Boston bombing project Patriots Day, also from Lionsgate with CBS Films. “Nine Stories had just made a deal with Bold Films [which has since been extended until 2020] who produced and financed Nightcrawler, Whiplash, Drive and all those other movies,” says Gyllenhaal. “As Stronger was waning I slipped them the script, said, ‘Do you want to finance this with us,’ and they said, ‘Yes.’ All of a sudden my company was involved in producing a film.” Lionsgate remained as the film’s worldwide distributor, with Roadside Attractions handling in the US.

Once in production, one of the tasks for Gyllenhaal and Gordon Green was to ensure the film wasn’t a “conventional inspirational story”. “The alarm bell would ring at times,” admits Gyllenhaal. “Things like music cues, behavioural choices… David and I were very specific about the honesty of moments. A lot of that had to do with his technique — rolling for long periods of time.”

Various people from Bauman’s story were also cast as themselves, including Dr Jeffrey Kalish, his real doctor from Boston Medical Center, and Paul and Greg Martino of United Prosthetics who designed Bauman’s artificial legs. “They checked us, and Jeff was constantly checking the bullshit meter,” adds Gyllenhaal, who spent almost a year hanging out with Bauman before the production started. “That’s who he is. The mentality of Boston is also about not faking it, but trying to be honest. We knew we’d get a lot of shit if we didn’t do that.” Understandably, Bauman did not visit the set, but he did stay in contact with Gyllenhaal throughout.

For Gyllenhaal to realistically portray someone with Bauman’s disability, a complicated mix of CGI and practical solutions were required. He describes one deceptively simple scene where Bauman goes into his apartment on his wheelchair and gets into the bath. “The bathroom scene is a microcosm of every department that made this film work… it was a mind-meld,” says Gyllenhaal.

The opening shot required a wheelchair custom-built by the props team that hid the actor’s lower legs. Transferring to the bath saw his legs digitally removed by the visual-effects team, but in the next shot his legs were hidden in a specially built tub, before an overhead shot once again used digital effects.

Gyllenhaal also spent a lot of time trying to replicate the unique leg movement of someone with Bauman’s injuries. “What I noticed after spending so much time with Jeff without his prostheses,” says Gyllenhaal, “was that the abdomen muscles move the legs very fast, because they don’t have the weight of the rest of the legs. It’s a flipping movement that you haven’t seen in movies very much but is a staple for anyone with this disability to deal with.”

In recent years Gyllenhaal has shown a knack for picking interesting roles with distinctive filmmakers, from Nightcrawler with Dan Gilroy, to Nocturnal Animals with Tom Ford and Okja with Bong Joon Ho. “There was a time in my career where I was a little less conscious of the choices I was making; I maybe felt that [my career] was something that could last,” he explains. “Then I came to the conclusion that it was something that could actually go away… I’ve learned what my strengths and weaknesses are, and I moved towards relationships with filmmakers, that’s what’s changed. Some of those [directors] at the time weren’t the most popular people to everyone else.”

He is referring to Villeneuve, now an A-list director after Arrival, Sicario and Blade Runner 2049. Gyllenhaal worked with him on Prisoners and Enemy (both 2013) and the duo will reunite with The Son, a Nine Stories project based on the book by Jo Nesbo. Gyllenhaal says they are in the middle of the script and are “moving quickly”. “I understand what high demand Denis is in, but I also understand my relationship with him,” he says. “We worked together before all of Hollywood was obsessed with him, so I think he is loyal in that way.”

Other titles Gyllenhaal is starring in and producing are Paul Dano’s directing debut Wildlife; Stephen Gaghan’s videogame adaptation The Division; The Anarchists Vs ISIS directed by Daniel Espinosa; and Rio, from Call Me By Your Name’s Guadagnino and co-starring Benedict Cumberbatch.

The actor is also developing projects he will not act in, including a series for A&E on cults throughout history; Alex Timbers’ Theatre Of War, based on an episode of Ira Glass’s radio series This American Life; Michael Showalter’s The Last Ride Of Cowboy Bob; and The Good Time Girls, directed by Courtney Hoffman and starring Laura Dern.

“My intention of starting a production company was not to generate material for myself,” he says. “It was to champion filmmakers and then have an acting career separately. Producing allows me to devote myself as an actor for hire even more intensely and with more respect for directors because I have a whole other outlet as a filmmaker. That’s the blessing of it.”