Jeff Wayne’s Musical Version of The War of The Worlds – Alive On Stage! The New Generation 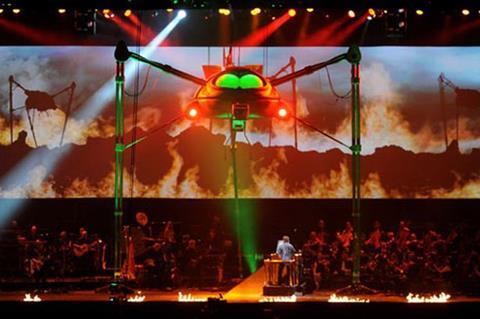 Boasting possibly the most unwieldy title for some time, this filmed version of Jeff Wayne’s re-imagined production was shot in front of a sell-out audience at London’s 02 Arena in December last year, and will receive a series of platform digital screenings in the UK prior to a likely swift transition to home entertainment. Fans of the musical production will enjoy this effects laden new version, though those who have missed out on Wayne’s music may wonder what the fuss is about.

The hit singles from the album – The Eve of The War and Forever Autumn – help focus proceedings, and there is much to admire in Liam Neeson’s enthusiastic ‘performance’ (especially in his hologram moments).

Jeff Wayne’s Musical Version of The War of The Worlds – Alive On Stage! The New Generation (yes, this is the full title), screens in the UK on April 11 and 14 via More2Screen, a leader in event cinema, which has staged platform releases of opera and ballet on cinema screens, as well as musical theatre such as Chess In Concert and Stephen Sondheim’s Company. The strong cast and recognisable tunes (especially for those who have grown up with the music) will make it an appealing event experience.

Wayne first released the double-album The War Of The Worlds in 1978 and in 2006 staged a series of live arena tours that featured an audio and visual role for Richard Burton as ‘The Journalist’, which comprised 74 recorded sequences. This new version – or ‘New Generation’ as it calls itself – features Liam Neeson in that role, featuring 90 sequences and including three impressive scenes in which he appears as an 11-foot high hologram, interacting with the show’s live performers.

Jeff Wayne again conduct the performance, and is reunited with the Black Smoke Band and the ULLAdubULLA Strings to present a new vision of his musical multi-media event, which includes a host of special effects with CGI projected onto a 100 foot wide animation wall (which features performers, effects and animation) as well as pyrotechnics, illusions and a 35 foot tall Martian Fighting Machine that hovers close to the audience, fires real flames and ‘lands’ on the centre stage.

As with any filmed version of a live performance there is always a feeling that there is more fun to be had at the event itself than at any recording. There are moments when the spectacle of the show is exciting and enjoyable, but at the same time there are sequences when it plods rather – as the filmmakers find it hard to do little more than simply record the proceedings rather than interact with what is happening – which then tends to expose the familiarity and repetitiveness of the music.

The hit singles from the album – The Eve Of The War and Forever Autumn – help focus proceedings, and there is much to admire in Liam Neeson’s enthusiastic ‘performance’ (especially in his hologram moments), but there is no getting away from the fact that thesingers make brief arrivals (and some have a go at acting more than others) in-between the effects and the orchestral moments. They are all impressive – with Jason Donovan especially good as the Parson – but this is essentially an event production, with as much attention paid to the animation and physical effects as to the singers.