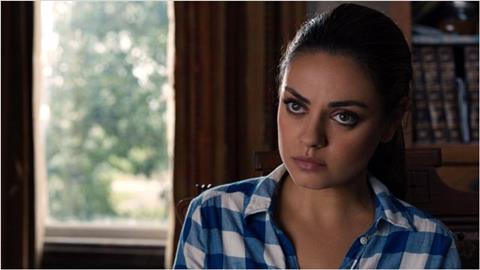 Unquestionably the singular work of the Wachowskis, Jupiter Ascending displays all the filmmakers’ worst tendencies without nearly enough of the visionary gusto they brought so long ago to The Matrix. Striving for a jaw-dropping sci-fi spectacle, the writer-director siblings end up with something painfully silly and overblown, burying a solid cast in a lot of makeup, costumes and needlessly convoluted plotting. Without a doubt, Jupiter Ascending can be powerfully intriguing because it’s such an unfiltered, ill-advised misfire, but this long-delayed project is an epic folly that will inspire plenty of snark.

Jupiter Ascending is so hyperactively “imaginative” that it’s downright exhausting.

Opening February 6 across most of the globe, Jupiter Ascending will be helped by the presence of stars Channing Tatum and Mila Kunis (not to mention Oscar-nominated actor Eddie Redmayne). But negative press surrounding this Warner Bros. production — specifically, the film’s exodus from the middle of summer to the normally less robust wintertime release schedule — could significantly harm theatrical prospects. The Wachowskis haven’t had a hit since their Matrix sequels, and considering that Jupiter Ascending isn’t based on pre-existing material, there’s no built-in audience craving, either. Dismal reviews and mediocre word-of-mouth will conspire to further doom this misbegotten offering.

Kunis stars as Jupiter Jones, a lowly Chicago cleaning lady who unexpectedly finds herself in the middle of a galactic struggle when Caine Wise (Tatum), a human-wolf hybrid, arrives to protect her from Balem Abrasax (Redmayne), a ruthless figure from another dimension who wants her killed for mysterious reasons. Jupiter soon learns that, despite her humble upbringing, her destiny concerns the fate of Earth.

Lana and Andy Wachowski made their name with the Matrix trilogy, merging a classic hero’s-journey narrative with revolutionary effects and a progressive message about the importance of the individual. Since then, they have remained ambitious (Speed Racer, co-directing Cloud Atlas with Tom Tykwer) without capturing the zeitgeist in quite the same way.

Jupiter Ascending is no less grand than those other films, but what it also shares with previous Wachowski works is a campy, leaden spirit that consistently undercuts the occasionally startling image or action sequence. On a script level, Jupiter Ascending is Joseph Campbell boilerplate: a young, seemingly insignificant woman discovers that she actually holds the key to great power. But the Wachowskis never view Jupiter as anything more than a damsel in distress, leaving Kunis to make wisecracks when she’s not busy trying to figure out the intensely complicated rules of Jupiter’s universe. (Essentially, human beings did not start on Earth, and now Jupiter’s ancestors — who can live for thousands of years — must track her down.) Instead of being a compelling character, Jupiter spends an inordinate amount of time asking Caine what’s going on so that she (and the viewer) can understand what’s happening.

The Wachowskis enjoy playfully balancing the cosmic and the riveting — the epic and the human — but Jupiter Ascending has an aggravatingly goofy tone. There’s nothing wrong with a giddy, knowingly cheesy space opera, but the woodenness of the performances and the scope of the bombast tend to weigh down everything. (Michael Giacchino’s pulsating score is as close as the film comes to a sense of true grandeur.) This is the sort of sci-fi movie in which just about everyone has an indigestible name — Chicanery Night, Kalique Abrasax, Gemma Chatterjee, Phylo Percadium — and several of the actors speak in strange accents or in an affected way to emphasize how “otherworldly” the story is. (Redmayne’s hammy, wimpy villain talk-whispers most of his dialogue as if a boulder is crushing his diaphragm.)

To be sure, there can be some stray fascination in watching the Wachowskis work their strange little turf. Emphasizing opulent costumes, exotic alien creatures and fan-boy geekiness, Jupiter Ascending flaunts a style that’s more vivid and sensuous than their action-movie peers. (Where other event movies focus on being “cool,” the Wachowskis’ films long to be philosophical, almost spiritual.) But Jupiter Ascending is so lush and melodramatic that the overkill quickly becomes outrageous, the ridiculousness of its visual design often at odds with the characters’ life-or-death solemnness. (And when the Wachowskis do go for laughs, the jokes crash and burn.)

Not surprisingly, the performances range from competent to embarrassing. As the disgraced warrior Caine who’s seeking redemption, Tatum is even more monosyllabic than he was as wrestler Mark Schultz in Foxcatcher, failing to suggest a stoic heroism. Kunis uses her large, expressive eyes to convey Jupiter’s shock at stumbling into this intergalactic battle, but she and Tatum never spark, which becomes a major problem once it becomes clear that their characters are meant to fall in love. As for Redmayne, he can’t transcend the unfortunately awkward to make Balem a suitably hiss-worthy adversary.

When the Wachowskis broke through with The Matrix, they did it in part because of cutting-edge special effects. In its announcement that Jupiter Ascending would be moved from July 2014 to February of this year, Warner Bros. explained that the siblings needed time to finish the effects work. But while individual sequences impress — especially a faceoff between Caine and Jupiter’s pursuers across the Chicago skyline — some shots can simply look gaudy, only adding to the feeling that Jupiter Ascending is so hyperactively “imaginative” that it’s downright exhausting.