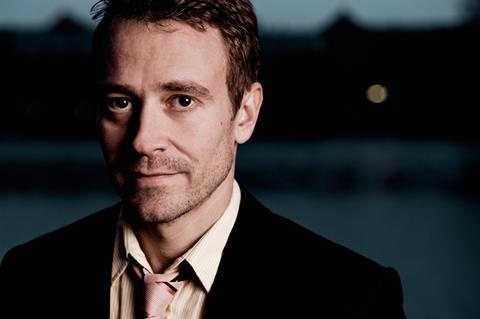 After premiering short documentaries such as Tal R: The Virgin, Expedition to The End of the World and Moon Rider at Karlovy Vary over the past few years, Swedish born director Daniel Dencik returns to the festival to screen his feature The Gold Coast (Guldkysten) in International Competition.

Set in the 1830s the film follows 28-year-old Wulff who leaves Copenhagen for Danish Guinea in order to set up a coffee plantation. There he discovers that, despite Denmark’s ban on the trade of slaves, there is a dark secret at the heart of the colony. Soon Wulff discovers that events are spinning out of control and that his ideals will soon clash with the brutal reality.

Playing out like a fever dream, the Danish film is a remarkable and striking piece of work that matches hypnotic visuals with a pointed expose of a dark chapter in European – and human – history.

Dencik spoke to Screen about the film and his hopes for this year’s edition of Karlovy Vary.

The spark for Gold Coast was when you came across the letters of Wulff Joseph Wulff. Tell us a little more about how you can across the story and what inspired you to make the film

My starting point was that the high romanticism deserves a movie. It is not a very illuminated period in film, almost forgotten. I come across some letters from 1836 at the Royal Library in Copenhagen. The letters are written by a young Dane, who was stationed at Gold Coast - at that time a Danish trading post in West Africa - and they burn to this day with desperation, adventure and furious solitude. I read everything that was written about the time. In the film I combine several people and events into a new story. The film deals with something we know very little about. Moreover, it is an era that is similar to our own. We are, as the Romantics, at the end of the road after a 20th century which, in an effort to streamline and rationalize the world order, led too so much tragedy. I wanted to create a hymn. A hymn to all living things.

While you’ve worked in the arena of fiction - such as writing novels - your filmmaking work has been mainly focused on documentary.  How important was it to have this documentary feel to The Gold Coast?

I try to fill the actors with everything I know and can. I tell them about my own life. Trials and triumphs. I introduce them to the experts, scientists and philosophers, which I like to listen to. But when it’s done, I step into the background. So I operate only as an invisible force. I want the actors themselves to embrace and embody their characters. They are at this point wiser than me. I shoot long takes where I try to set it all free. I wish for the scene to unfold in a manner that you could never have planned for. I go for freshness and playfulness. No stone is left unturned.  I return to the same point again and again. I find myself in the hunter-collector mode. Anything goes, as long as it adds something new to the film. We all go exploring in the story, the characters, in today’s shoot.

I’d like to know a little more about the filming, much of which was done in Ghana. How did you approach the filming and what kind of obstacles did you face?

It was like being on a journey together. I have travelled a lot in my life, and I love the state you get into after just a few days on the road. You are opening to the world. You meet the adventure that life really is. The challenge was to transfer this state of mind to the shooting period.

It’s a very ambitious film. How supportive were the Danish Film Institute with your aspirations and ideas? Was there any time when people thought you were being too ambitious?

Probably. But everyone at the Danish Film Institute were totally supportive. I see the film as a dream. It is true, but it is not following a certain narrative from the historical documents. It is a mosaic of many voices. Everything that happens in the movie took place in one way or another, I truly believe so. But the past is just the stories we tell about ourselves. I feel a responsibility to tell the story of Europe and slavery in a way as nuanced and many-layered as possible. It was never black and white. But for me it is a story about the greatness of the individual, and the stupidity of the masses, namely the inhuman systems that humans all too often subject themselves to.

Jakob Oftebro gives a very intense performance in the lead. How did you go about casting him and how did you work together to give such a performance?

I think he is without a doubt the actor of his generation in Scandinavian films. He has that rare leading-man quality. You just want to rest your eyes upon him. He has an intensity and tranquility about him that is hypnotic. In a way he is timeless. I think we are a good match, something very fortunate happened when we started working together. It’s like it was meant to be. Like when you meet the love of your life, and you feel that this was written in the stars all along. You just fulfil something that was pre-destined to happen.

How did you get legendary composer Angelo Badalamenti involved?

I know Mary Sweeney, who worked and was married to David Lynch. Mary watched and, I guess, liked my documentaries and she introduced me to Angelo Badalamenti. It was pretty straight-forward. He invited me to his studio house. I flew to the States with nothing but a date and a place on Google map where to meet him. But he just got the idea of the film from the minute we shook hands. His work is so precise, although it operates in a very dreamy landscape.

You’re screening in the Karlovy Vary Competition on the 50th Anniversary of the festival. What does the festival mean for you and what are hoping to get out of this year’s festival?

I am entering competition at Karlovy Vary for the third year running. All my three documentaries have played at this beautiful festival. I think it’s a great gift for any film maker to be able to develop such an intimate relationship with an important festival. They’ve had my back from the start, and I really treasure this relationship we have. I enjoy the sincerity of the audience. The festival has become an integral part of my summer plans.

Do you have any idea on what you’ll be doing for your next project?

I’d like to make an international project, where both the cast and the financing is partly European, partly American.