Anti-Nazi satire from Stations of the Cross director Dietrich Bruggemann and a new documentary from Mark Cousins among titles. 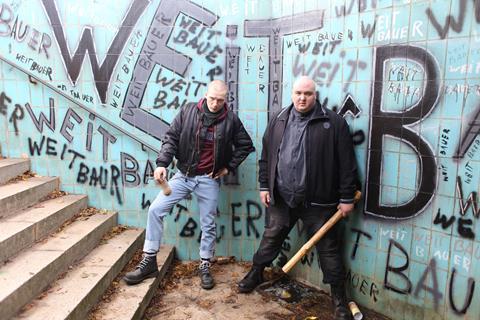 Scroll down for competition line-ups

The 50th Karlovy Vary International Film Festival (July 3-11) has unveiled the competition titles in its Official Selection, East of the West, Forum of Independents and Documentary sections.

The main competition will comprise seven world premieres and six international premieres, including the new film from Stations of the Cross director Dietrich Brüggemann, Heil, a satirical comedy centred on neo-Nazis.

Polish documentary director Marcin Koszałkaʼs will present his feature debut, The Red Spider, a psychological thriller inspired by true events from the 1950s that delves into the mechanisms that give rise to a mass murderer.

Danish documentary maker Daniel Dencik will present his first feature, Gold Coast, about a young anti-colonial idealist who sets out for Danish Guinea to set up a coffee plantation - but not everything goes to plan. The music is from David Lynch collaborator Angelo Badalamenti.

Kosovar filmmaker Visar Morina will present his first feature Babai, the story of a 10-year-old boy who follows his father on a journey from Kosovo to Germany.

There are two female directors in the main competition.

The new feature from Anca Damian (Crulic: The Path to Beyond) is The Magic Mountain, which investigates the adventures of mountain climber and photographer Adam J. Winkler, who fought in Afghanistan with the mujahedin against the Soviets in the 1980s. The director has told the story using an animated collage of period material.

The second female director in competition is Ukrainian filmmaker Eva Neymann (House with a Turret), whose third picture Song of Songs  features loosely connected images of the lost world of the Jewish shtetl at the beginning of the 20th century, inspired by the work by renowned Yiddish writer Sholem Aleichem.

Bob and the Trees, an US production by Massachusetts-based Frenchman Diego Ongaro, is one of seven competition debuts. Shot in cinéma vérité style, the story features 50-year-old logger and farmer Bob Tarasuk, a charismatic workhorse with a soft spot for golf and gangsta rap.

Five years after the multi-award winning Berlinale competition film If I Want to Whistle, I Whistle, Romanian director Florin Șerban will bring to Karlovy Vary his intense drama Box, whose story follows the movements of a talented 19-year-old boxer and an attractive thirtysomething mother at a critical moment in her life.

In his debut The Sound of Trees, Canadian filmmaker François Peloquin portrays a drama of adolescence set against the Québec landscape.

Austrian director Peter Brunnerʼs soul-searching study Those Who Fall Have Wings, whose title acknowledges inspiration from the poetry of Ingeborg Bachmannʼs, is about coming to terms with the loss of a loved one.

The Czech Republic will be represented in the main competition by two titles. First-timer Slávek Horákʼs Home Care centres on a devoted nurse who faces an almost insurmountable obstacle, mixing serious issues with gentle humor.

Finally, drama The Snake Brothers from Jan Prušinovský tells the story of Cobra and Viper, who each deal with desolation and lack of funds in their small Central Bohemian town.

East of the West

The East of the West strand will open with the world premiere of Journey To Rome (Cesta do Rima), the feature debut of Tomsz Mielnik.

A co-production between the Czech Republic’s Background Films and Poland’s EasyBusyProductions, the film centres on Vasek, a shy man in his early 30s, who steals a painting from the National Gallery and makes a dash for Rome by train.

The Forum of Independents section will open with the world premiere of Hopefuls (Aspirantes), the debut feature of Brazilian director Ives Rosenfeld.

The film centres on a young man who sees football as a way to escape his ordinary life. But he cannot match the talent of his friend and his dream soon fades.

The Documentary Films strand includes the international premiere of I Am Belfast, from director Mark Cousins (The Story of Film: An Odyssey).

In the doc, the city is personified by a 10,000 year old woman who reveals the story of Belfast, a city in Northern Ireland. Portions of the film, with a score by composer David Holmes were screened at the 2014 Belfast Film Festival.

The doc section will also include the European premiere of Palio, from Cosima Spender. The film, about the famous horse race that takes place in the Italian city of Siena, is from the producing team behind acclaimed docs Senna and Amy. It received its world premiere at the Tribeca Film Festival earlier this spring where it won the prize for best documentary editing.

Short docs will also feature in the line-up including Kacey Mottet Klein, Birth of an Actor from Swiss director Ursula Meier, who won the Silver Bear in Berlin with Sister (L’enfant d’en haut) in 2012 and also made 2008 feature Home, starring Isabelle Huppert.

East of the West - Competition