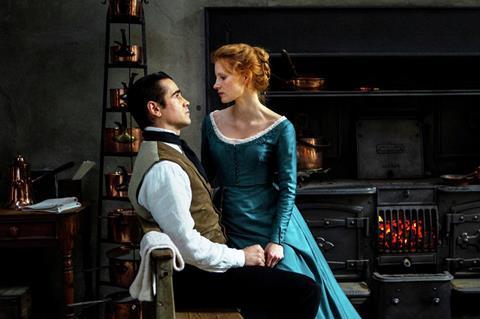 The credits may claim this is an adaptation of the August Strindberg play, but truth to be said, there is far more of Liv Ullmann here than of the play that scandalised Europe at the end of the 19th Century and has become since one of the most popular items on world stage. Not only because Ullmann’s version moved the action from Sweden, a protestant country, to catholic Ireland, which makes quite a difference in the mentality of its characters, nor is it because Miss Julie’s father has been demoted from Count to Baron, which truly makes no difference.

With the action moving in and out of the kitchen, into the servants’ quarters, the courtyards and the park, Mikhail Krichman’s camera has lots of opportunities to shine, from intricate chiaroscuro interior shots to the gloriously luminous outdoors sequences.

Even the constant daylight accompanying a plot which is supposed to take place at night ending next morning, or the decision to leave only three characters and cut out the others, are not the main problem. But by opening the play, which originally takes place in a manor’s kitchen, and spreading it all through the manor and the grounds surrounding it, all the tremendous claustrophobic intensity of the original is scattered to the winds. And that will not go unnoticed by theatre lovers, who should be the immediate audience of such a film.

Strindberg ferociously explored at the time the clash between two characters representing diametrically opposite worlds, with a tenacity that shocked his contemporaries. Miss Julie, the master’s daughter in a class conscious society where everyone is supposed to know their roles and their places in the hierarchy, thinks she can break the rules in her encounter with John, her father’s valet, whom she goes down into the kitchen to taunt, tempt and humiliate, while everyone else, except for Christine (in Ullmann’s version she is called Kathleen), the cook who might be John’s fiancée, is out to celebrate Midsummer’s Night.

But things do not turn out the way she had planned, if she did have a plan to begin with. Her intention to dictate the terms of their encounter, are soon overturned, for she may belong to the ruling class, and he to the lower ones, but in the world they live in, he is a man and she is a woman, and this gives him the upper hand. In the ensuing Darwinian struggle between them, to use Strindberg’s own description of the play as a “life and death fight for the survival of the fittest”, she doesn’t have much of a chance to prevail. Though comparing her defeat, as Ullmann does it in the last scene, to that of Hamlet’s Ophelia, may be decorous and pleasant to the eye, but not very convincing.

In Ullmann’s version, Miss Julie, as played by Jessica Chastain, is already a nervous wreck by the time she makes her initial entrance on stage and from that point on she goes all the way down, her real grief coming up to the surface only towards the end when she realises she had hit the bottom. Facing her, John (Colin Farrell) can’t help looking all through like a movie star who lost his way into the uncomfortable costume of a servant who is still looking for the exact character he is supposed to play. In between Julie’s aristocrat spiraling down on her way out, and John’s working class ambition looking up, Kathleen (Samantha Morton) has a much more significant part than Strindberg ever thought of, as the one person confident in her perception of the world and refusing to accept any other.

With the action moving in and out of the kitchen, into the servants’ quarters, the courtyards and the park, Mikhail Krichman’s camera has lots of opportunities to shine, from intricate chiaroscuro interior shots to the gloriously luminous outdoors sequences.  On the other hand, refusing to abide by time and space stage rules requires Ullmann to establish a continuity of her own to explain the movement of her characters, which results in some uncomfortable cuts that might have been avoided had it all been restricted to the original kitchen. As for the music, exquisite on its own terms, Schubert, Schumann, Bach or Chopin provide here a kind of calm, melancholy sadness that  neither reflects the mood of the piece, nor serves as an adequate counterpoint.