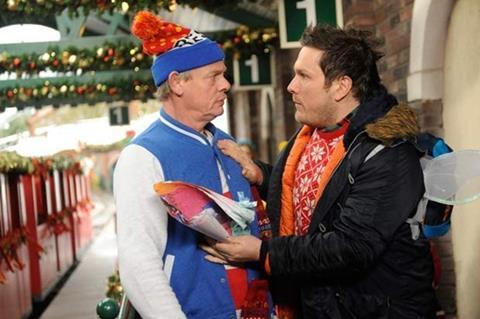 Christmas comes early to unsuspecting British cinema screens with the release of festive family sequel Nativity 3: Dude, Where’s My Donkey?!, a freewheelingly silly comedy romp aimed fair-and-square at young ones as well as those parents who helped make the previous two films such successes in the UK. This time round the filmmakers opt (rather oddly) for a more straightforward and almost grown-up storyline that lacks much of the childlike charm that made the first films so successful, an while there are pockets of innocent humour and childish antics it lacks a much-needed sense of fun.

Martin Clunes appropriately, given his character has lost his memory, plays things pretty straight, while the talented Catherine Tate curbs her natural comedy skills as a woman confused by being faced with a very different man than the one she knew before.

That being said, if the surprise success of the first two films are anything to go by, this early entry to the Christmas movie marketplace may well strike an early chord with UK families keen to get into the festive spirit, and with few Christmas-themed films set to hit screens it could well hang in there over the holiday period.

The first Nativity! was a real low-budget surprise, focussing on small children at a Coventry school, while its sequel, Nativity 2: Danger In The Manger saw the youngsters head off to a singing competition in Wales. This time round no expenses are being spared (well, that isn’t quite true, because this is still a modestly budgeted film) with the children entering a flash-mob competition in London with the final set to take place in Manhattan.

What made the films so successful was the combination of the engagingly inept singing-and-dancing comedy antics of the young children (all pretty much improvising) combined with the often-hilarious antics of man-child would-be teacher Mr Poppy (Marc Wootton). This time round we do get some classic Mr Poppy moments (particularly his ‘Snow Pig’ routine, of which more later), but for some reason this time round writer/director Debbie Isitt decides to give the game youngsters a lower profile and layer in more story (such as it is) and a series of rather inept musical routines. It means the film is often ponderous, particularly towards the end, when it should be pacy, and sentimental when it should be plain old silly.

Each new Nativity film brings a new teacher into the fold. The first two had Martin Freeman’s Mr Maddens and then David Tennant’s Mr Peterson, while this time round the children at St Bernadette’s are introduced to Martin Clunes’ unsuspecting Mr Shepherd. He arrives at the school with a daughter Lauren (Lauren Hobbs), who enrols in the class, and also has fiancée Sophie (Catherine Tate), who he is set to marry at a Christmas-time ceremony in New York.

Things take a turn for the worst when he first of all tries to eject Mr Poppy from the class, and then accidentally gets kicked in the head by Archie the donkey. He loses his memory, forgetting his daughter, his fiancée and any notion of Christmas…as well as having no idea what he did with Archie. Mr Poppy and the children take it on themselves to try and get his memory back, which involves a series of songs, flash-mobs and other antics around London before they all head to New York and a wedding showdown with Sophie.

Martin Clunes appropriately, given his character has lost his memory, plays things pretty straight, while the talented Catherine Tate curbs her natural comedy skills as a woman confused by being faced with a very different man than the one she knew before. They are very much playing straight-man to Marc Wootton’s off-kilter man-child Mr Poppy, a man suffering from arrested development and who has an often charming childlike outlook to the world.

It is his sheer determination to keep things surreal and silly that keeps the film from becoming rather too serious, and while things do get too stretched towards the climax once he gets into Snow-Pig outfit and somehow (don’t ask) manages to get Archie the donkey over to Manhattan that the film finally clicks into the funny and frantic film the audience needs it to be. It is perhaps all a little too late though – the lack of out-and-out silly laughs might make it harder for youngsters to go along with Isitt spending too much time on an adult love affair rather than much needed schooltime silliness.