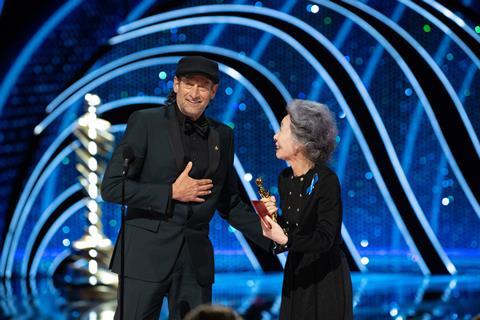 Troy Kotsur at the 2022 Oscars

The 2022 Oscars still delivered the ceremony’s second lowest viewership rating in history, however the considerable increase will only be taken positively by Academy officials and ABC executives.

An overall 3.8 rating among the key 18-49 demographic increased 73% gain on last year’s show. Overall the 2022 Oscars delivered the highest rating of any primetime entertainment special in two years in that demographic, overtaking the 2020 Oscars.

A 3.2 rating in the key 18-49 demographic represented a 68% gain on last year’s numbers, based on the fast national ratings released by Nielsen on Monday morning. Confirmed numbers will emerge on Tuesday.

The telecast from Hollywood’s Dolby Theatre co-hosted by Regina Hall, Amy Schumer and Wanda Sykes overran its scheduled three hours by roughly 40 minutes. That came after an hour-long segment emceed by Josh Brolin and Jason Momoa that was not broadcast live in which winners of five crafts categories and the three short-films received their Oscars.

Last year’s fast national ratings reported 9.8m viewership, which went up the following day to 10.4m once out-of-home viewing and streaming were taken into account, and a 1.9 rating in the 18-49 demographic.