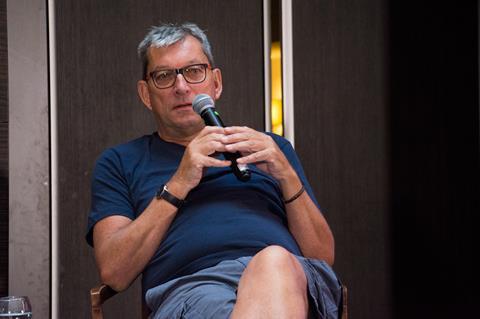 Meinolf Zurhorst, the highly-respected producer, commissioner and writer who has worked at French-German public broadcaster ARTE since 1992, was in Sarajevo Film Festival on Tuesday (Aug 14) to deliver a reflective talk on his career.

In an interview with Simon Perry from the ACE Producers network, Zurhorst discussed his time at ARTE, which he first joined as a commissioning editor in the cinema department, before becoming head of the ARTE film department of German broadcaster ZDF (one of ARTE’s major shareholders and where the films are broadcast in Germany) in 2000. He is now set to retire from his position in February 2019.

After working as a photographer, writer of popular fiction, and a director/producer, Zurhorst was approached for the Strasbourg-based ARTE role in the early 1990s, working as part of the team backing feature film projects in both France and Germany.

He recalled that German public TV backers including ARTE were crucial at the time for launching the careers of major directors such as Werner Herzog, Wim Wenders and Rainer Werner Fassbinder.

The company would put significant amounts of money into feature films, taking broadcasting rights but also allowing the films to travel to festivals, where they often received top awards, and to have theatrical runs, which sometimes resulted into major accolades. “I feel it is our obligation to support the theatrical landscape,” he said.

However, when he began at the company in its Strasbourg office (a city on the France-Germany border that also houses the European Parliament and Eurimages), he said he had resistance from his French colleagues, who saw the feature film department as their territory. Zurhorst said he “had to learn French very quickly” and convince his peers to accept him in the role.

Since 2000, he has occupied a position that has seen him act as the sole gatekeeper for feature film backing from the German side of ARTE.

Under his leadership, the company has backed 200-300 films, he estimates, including critical, festival and awards hits such as Sebastián Lelio’s A Fantatic Woman, Samuel Maoz’s Foxtrot, Alice Rohrwacher’s Happy As Lazzaro, Susanne Bier’s Love Is All You Need, Olivier Assayas’s Clouds Of Sils Maria, and Miguel Gomes’ Arabian Nights trilogy.

During his tenure, ARTE has also been involved in multiple films from Danish director Lars von Trier, including Antichrist and the recent Cannes premiere The House That Jack Built. Zurhorst said von Trier is a “genius” who “is reinventing himself all the time”, and he had never had any problems with the director. Von Trier had even granted him permission to edit scenes from his films so that they could pass for German TV broadcast, he added.

Typically, his wing of ARTE will invest in six films per year, usually in the €180,000-€200,000 range. On average, the money accounts for roughly 10% of a project’s budget. They also tend to recoup from profits in a late position, which Zurhorst said means they rarely see a return, but that isn’t of interest to him because his focus is the artistic success.

He also added ZDF does not automatically take broadcast rights for Germany, and will pay more when it decides to do so on a project.

Early in his time at ARTE, private television became a new competitor to the public networks in Germany, he recalled, and a system that had previously offered plenty of space for artistic sensibilities began to become more focused on ratings. However, Zurhorst insists while “the pressure on everyone is rising [to deliver ratings]”, his focus remains on cultural sensibilities.

Throughout this career, he has retained a commitment to supporting indie European films from the less-represented territories, as well as projects from the global sphere.

“We have a vision of what films we think should be made and what stories should be told – not to please a certain audience and get a certain rating. If I want to have good ratings I’ll start buying classic westerns, they have the best ratings in Germany,” he said.

During his time at the broadcaster, various initiatives to boost ratings have been implemented above his head, such as one director of programming’s decision to stop subtitling films and to insist on dubbing, which Zurhorst says “didn’t work” and has now been rolled back on.

While ARTE continues to back significant arthouse films, Zurhorst explained he faced a greater challenge than ever to secure them good television slots.

“We now have more and more American films or classics in primetime slots. Films from Europe are more in the late evening, with only some exceptions,” he said. “I have to fight for every single film we programme.”

He used the example of Sebastián Lelio’s A Fantastic Woman, which he says would have been broadcast late in the evening were it not for the film’s triumph in the foreign language Oscar category.

As he now looks forward to his retirement in February 2019, Zurhorst will be backing as many films as possible in his remaining six months.

He hoped national public broadcasters would remain an essential funder of European film. However he warned that with the average viewer aged in the 60s for both France and Germany, the networks may need to adapt to survive.

Asked by Perry whether online streaming services represented a challenge to public broadcasters, Zurhorst noted while the likes of Netflix and Amazon had been prolifically buying films from festivals when they first rose to prominence, this had now dried up. Instead, they were investing in “big names” and “commercially attractive projects”, which he said means that door has largely closed for arthouse filmmakers.

Summing up his career, Zurhorst said he was pleased to have remained outside of the mainstream during his time at ARTE. “I’m still an outsider, that has guaranteed my freedom for all these years.”