Baftas 2023: Netflix leads the way among distributors with 21 nominations 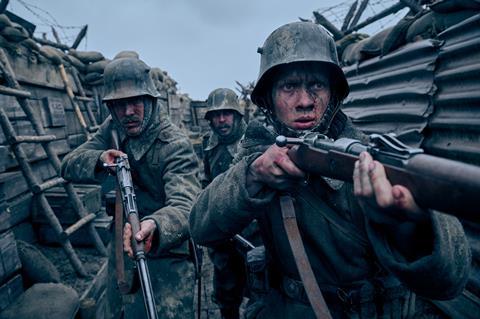 Netflix is the leading distributor for this year’s Bafta nominations with 21 nods to its name.

Netflix’s titles include German war drama All Quiet On The Western Front which scooped up the most nominations of any film this year with 14 in total. Other Netflix titles are Blonde (1), Guillermo del Toro’s Pinocchio (3), The Good Nurse (1), The Swimmers (1) and The Wonder (1).

Next is Disney which has 19 nominations altogether: Disney itself has five nods while Searchlight has 14, with The Banshees Of Inisherin picking up 10 of those.

In third place is A24 with 14 nods – 10 for Everything Everywhere All At Once and four for The Whale.

This is followed by Universal, which landed the most nominations last year, and Warner Bros which both have 13. Lionsgate is next on 10 and then Paramount on seven.

Besides A24, other independent distributors also fared well with Mubi managing to collect six nominations for Aftersun (4) and Decision To Leave (2). This was followed by Dogwoof on three and Altitude on two.

Apple TV failed to pick up a single Bafta nomination this year after being last year’s top awards contender with Coda, which went on to win two Baftas for best supporting actor and best adapted screenplay. Apple TV’s Emancipation only appeared once this year on the longlist (for make-up and hair).

Amazon collected just one nomination for Argentina, 1985 in film not in the English language. This is down from the streamer’s three nominations last year.

Universal/Focus Features (13)
Brian and Charles 1
Marcel the Shell with Shoes On 1
Moonage Daydream 1
Mrs Harris Goes to Paris 1
Puss in Boots: The Last Wish 1
She Said 2
Tár 5
Till 1

Entertainment One (3)
The Fabelmans 1
The Woman King 2