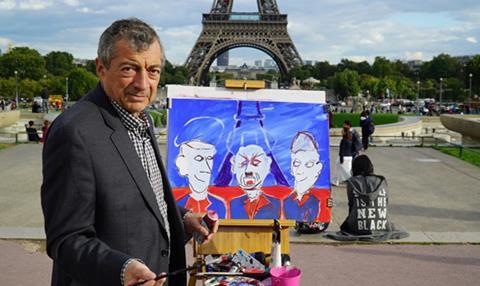 Playing in the Berlinale Culinary Strand from Thursday, Trevor Graham’s documentary feature Monsieur Mayonnaise is a lighter look at a dark chapter of history.

The film explores the little-known family background of filmmaker Philippe Mora, director of Dennis Hopper-starring Mad Dog Morgan, in a tale that takes in an escape from Nazi Germany and missions for the French Resistance, where Mora’s father was given the code name Monsieur Mayonnaise due to his passion for the condiment.

Graham initially became friends with Mora through social media. Mora was already working on the story of his family’s wartime experiences in a comic book format and Graham suggested a documentary charting both that project and Mora’s efforts to trace his family’s history.

Mora reveals that he had been impressed by Graham’s 2012 documentary Make Hummus Not War, a film that managed a light-hearted tone despite being set against the backdrop of the conflicts in the Middle East.

“We knew we wanted to do something that was humorous. Philippe’s own work dabbles in satire and humour, and unusual ways of seeing the world,” director Graham tells Screen. “We both had trepidation about the more light-hearted approach, but both of us thought there’s no point making it unless you can make it funny. My feeling as a filmmaker is while you need to have gravitas, you also need humour. Because that’s what life is like, even in the direst of circumstances,” he adds.

“The special thing about this premiere is that it’s in Germany,” says Mora, who in fact recently became a German citizen more than half a century after his family fled the Nazis. “That’s fundamental to this movie, so it’s going to be very interesting to see the German reaction.”