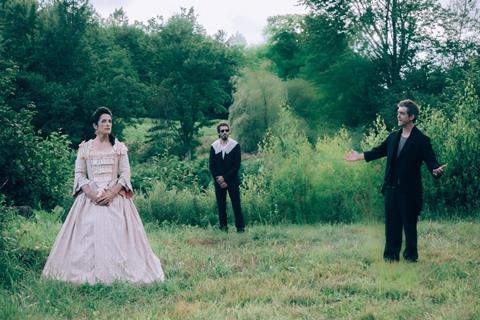 The Berlin International Film Festival has unveiled the features that will comprise its Encounters and Panorama strands, which will first be seen at the industry-focused, online-only event from March 1-5.

Like other strands that have been slimmed down for this year’s first virtual edition, Panorama is nearly half of the 36 titles that were selected last year. However, the Encounters competition, now in its second year, is just three titles fewer than the 15 selected in 2020.

Panorama includes Theo And The Metamorphosis, the latest film from French director Damien Odoul, which centres on a young man with Down’s syndrome who lives in seclusion in the forest with his father. Odoul’s Deep Breath won a special jury award and Fipresci prize at Venice in 2001 while his drama After We’re Gone played Cannes’ Directors’ Fortnight in 2004.

British horror Censor will play Panorama following its recent premiere at Sundance and marks the feature directorial debut of Prano Bailey-Bond, who was named a Screen Star of Tomorrow in 2018.

Returning to the festival is German director Anne Zohra Berrached, whose drama Two Mothers screened in the Perspektive Deutsches Kino sidebar in 2013 while her second feature, 24 Weeks, played in competition in 2016.

Notable features in the Encounters line-up include US-UK co-production The Beta Test, directed by and starting Jim Cummings and PJ McCabe. Cummings previously directed Thunder Road, winner of the grand jury award at SXSW 2018, while McCabe is an actor who makes his directorial debut with The Beta Test.

Also in Encounters is Social Hygiene from Canada’s Denis Cote, who has previously played in Berlin’s main competition three times with Vic + Flo Saw A Bear in 2013, Boris Without Beatrice in 2016, and Ghost Town Anthology in 2019.

The festival also announced the six titles that will comprise its Perspektive Deutsches Kino sidebar, for rising German filmmakers. The features, all world premieres, include Jesus Egon Christ by David Vajda and Sasa Vajda, Mia Maariel Meyer’s The Seed, and Wood And Water from debut director Jonas Bak. A total of 225 films were submitted for the sidebar.

The festival is rolling out its selection this week and has already unveiled the titles in its Generation and Retrospective strands as well as its Forum selection. The Competition and Berlinale Special features will be revealed tomorrow (February 11).

As previously announced, this year’s Berlinale will take place in two stages, beginning with the online European Film Market (EFM), from March 1-5, which will include a film selection made up of the festival’s strands. While winners in the likes of the Encounters competition will be announced in March, the awards ceremony will take place at the physical, Summer Special event, set to run June 9-20.

Death Of A Virgin, And The Sin Of Not Living (Leb)
Dir: George Peter Barbari
World premiere

The Scary of Sixty-First (US)
Dir: Dasha Nekrasova