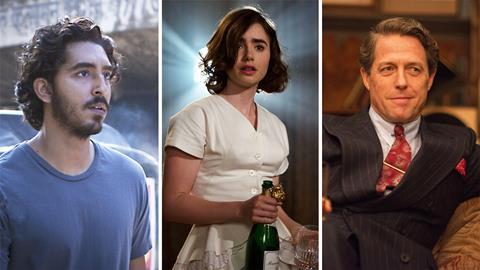 British and Irish actors have once again found wide recognition for their performances on television and the big screen, earning 18 acting nominations between them at the 74th Golden Globes.

Skyfall star Naomie Harris made the best supporting actress shortlist for Moonlight. She will face tough competition from Michelle Williams (Manchester By the Sea) and Viola Davis (Fences).

Dev Patel, most famous for his star turn in Slumdog Millionaire, is up for best supporting actor for his performance in the Weinstein-backed drama Lion.

Patel’s competition will include another British actor, Aaron Taylor-Johnson, who has been nominated in the same category for Nocturnal Animals, the follow up feature for Single Man director Tom Ford.

Sing Street, from Irish director Mark Carney, achieved a nomination for Best Motion Picture, Musical, or Comedy where it will face off against La La Land and Deadpool.

Against the odds, Lily Collins has been nominated for Warren Beatty’s box office flop Rules Don’t Apply, while Irish-Ethiopian Ruth Negga’s nod for Loving is much less surprising.

Andrew Garfield could’ve been up for the best drama actor prize for either Silence or war drama Hacksaw Ridge. Voters plumped for the latter after Scorsese’s religious epic was completely snubbed.

Colin Farrell completes the list of home nation film nominees – he’s been shortlisted for The Lobster.

British and Irish stars are also strongly represented in the TV categories – especially the cast of The Night Manager. Olivia Colman, Tom Hiddleston and Hugh Laurie were all nominated for the John Le Carre adaptation.

Colman is joined in the best supporting TV actress category by two more Brits; Lena Headey for Game of Thrones and Thandie Newton for Westworld.

Claire Foy is the latest actress to get an award nomination for playing Queen Elizabeth II, this time for Netflix series The Crown. Her competition includes Irish actress Catriona Balfe for her performance as time traveller Claire Frazer in Starz hit show Outlander.

Welsh-born Matthew Rhys, who plays Philip Jennings in ‘The Americans’, is nominated in the prestigious best TV drama actor category.

Riz Ahmed, who will hunt for the Death Star plans in the upcoming Rogue One, is also chasing a Golden Globe for his performance in The Night Of.

Finally, Charlotte Rampling will battle with Kerry Washington and Sarah Paulson for the best actress in a limited series or TV film award. She is nominated for London Spy.

The awards will be handed out on January 8 2017 at the Beverly Hilton in California. Jimmy Fallon hosts.