EXCLUSIVE: Sequel to the hit Danish comedy to include cameos from Isla Fisher, Maroon 5 frontman Adam Levine and Game of Thrones’ Nikolaj Coster-Waldau. 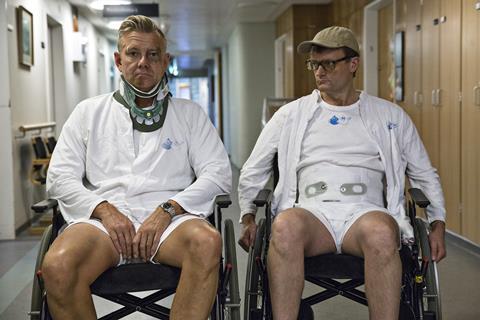 Protagonist Pictures has taken on worldwide sales rights outside Nordic territories to Klown Forever, the sequel to the 2010 smash hit Danish comedy Klown.

Protagonist has also taken over worldwide distribution of the first film and will be talking up both at next week’s Cannes Marche.

Based on a Danish TV series that ran from 2005 to 2008, the Klown films centre on the irreverent antics of two thirtysomething best friends and comedy partners Frank, played by Frank Hvam, and Casper, played by Casper Christensen.

Hvam and Christensen also wrote both features, while one of Denmark’s biggest film-makers Mikkel Norgard (The Keeper Of Lost Causes) returns to direct the sequel and Jesper Zartov produces.

In Klown Forever, Frank and Casper’s friendship is tested when Casper decides to move to Los Angeles and pursue a solo career there. Determined to win back his friend, Frank follows him to California for a holiday of spectacular misadventures.

Among the cameo apperances in the film are Isla Fisher, Maroon 5 frontman Adam Levine and Danish heartthrob Nikolaj Coster-Waldau (Game Of Thrones).

Klown, which was acquired for US remake by Warner Bros, has a host of self-declared celebrity fans including Sacha Baron Cohen, who hired Hvam and Christensen to write his next film The Lesbian at Paramount.

The film was distributed by Nordisk in Scandinavia and grossed more than $10m in Denmark alone, recording more than 855,000 admissions; it was sold by TrustNordisk to Drafthouse in the US and Arrow in the UK among other territories.

Nordisk is releasing Klown Forever this September in Denmark and both Hvam and Christensen will be in Cannes to launch the film to Danish and international media.