MAY 16 UPDATE: Marvel’s latest becomes the biggest film of the year internationally with $645m. 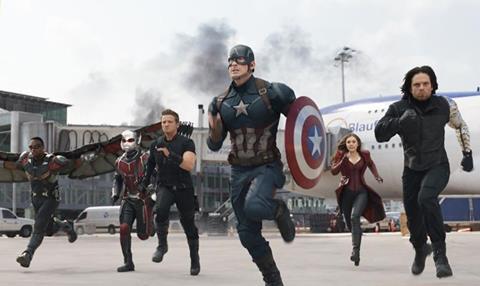 Captain America: Civil War continued to dominate the global box office as it reached $940.9m with an estimated $156.8m weekend.

Internationally, Marvel’s latest is now the biggest film of the year with $645m after only 19 days in release following an $84.2m weekend from its 55 territories.

At IMAX screens across the world, Civil War has grossed $64m after an $11m weekend, which included $6m from its 577 international screens.

This weekend saw Marvel outings hit the $10bn mark from 13 films over the course of nine years.

Having passed $800m worldwide on Friday [May 13], The Jungle Book has now swung to $828m at the global box office.

Overseas, the live-action remake took an estimated $15.2m from its 50 territories for $516.3m. It became the biggest film of the year to date in the UK with $56.5m, while its Chinese run formally came to an end with a stunning $151m.

Zootopia hopped to a further $4.7m from its 17 territories for $638m overseas and a global haul of $969.8m. Japan has now become its second biggest international market with $35.2m.

The Angry Birds Movie took off with an estimated $43m from its 74 markets on its international bow.

The video game adaptation lands in China and South Korea next week alongside its North American release.

Following its premiere at Cannes, the film opened with $1.6m in France from 421 screens and took $1.2m in Italy from 346 screens.

UPDATE: The Wailing recorded Fox’s biggest opening weekend of all time in South Korea with a terrific $16.5m from 1,481 screens.

That also marks the eighth biggest opening of all time for a local title and director Na Hong-jin’s biggest opening weekend ever, surpassing the lifetime haul of his previous film, The Yellow Sea.

Along with its North American now, the comedy sequel opens in 10 more territories next weekend.

The Witch scared up a $678k opening in Spain to lift its international tally to $8.1m, while Hail, Caesar! opened in its final market of Japan and took $161k for an international haul of $33.1m.

Criminal is up to $12m overseas after an estimated $7.5m weekend from its 15 markets, according to ComScore.

The Divergent Series: Insurgent and Gods Of Egypt have grossed $94.1m and $111.1m, respectively.

On its UK bow, Our Kind Of Traitor unearthed an estimated $539k.