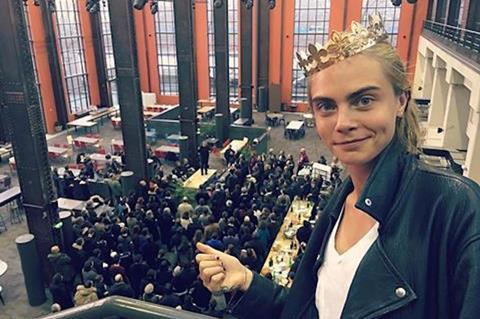 Delevingne, who will join recently announced Orlando Bloom, will play Vignette Stonemoss, a faerish refugee forced to come to the Burgue, where she must contend not only with rampant human prejudice against her kind, but with the secrets that have followed her to this new land.

Carnival Row is set in a neo-Victorian city, where mythical creatures fleeing their war-torn homeland have gathered in the city, and tensions are simmering between citizens and the growing immigrant population. The story follows the investigation of a string of unsolved murders which are eating away at whatever uneasy peace still exists.

The eight-episode Amazon original series, produced by Legendary Television, will be written and executive produced by showrunner Rene Echevarria. Joining Echevarria is Pacific Rim screenwriter Travis Beacham, who will serve as executive producer and wrote the feature script on which the project is based, A Killing On Carnival Row.

Paul McGuigan is set to direct and serve as an executive producer on the series scheduled to begin filming this autumn for a 2019 release.

Delevingne most recently starred opposite Dane Dehaan in Luc Besson’s Valérian And The City Of A Thousand Planets. Last year, Delevingne appeared alongside Will Smith, Margot Robbie, Jared Leto and Viola Davis in DC Comics’ Suicide Squad, and also starred in Chris Foggin’s Kids In Love.

Her upcoming projects includes Life In A Year, which she recently wrapped production with Jaden Smith in Toronto. Delevingne is represented by WME and Sloane Offer Weber & Dern LLP.

Legendary Television’s slate includes the upcoming reboot of family adventure series Lost In Space and The Looming Tower based on Lawrence Wright’s Pulitzer Prize-winning book on the events leading up to 9/11.