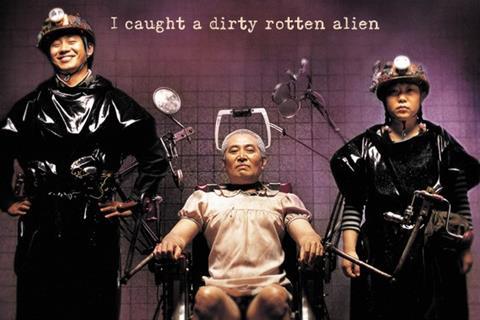 Section of poster from ‘Save the Green Planet!’

South Korean powerhouse and Parasite producer CJ Entertainment is teaming up with Midsommar and Hereditary director Ari Aster on an English-language remake of its 2003 genre-bender Save The Green Planet!

The original film’s director Jang Joon-hwan is attached to return to the director’s chair and CJ is producing with Aster and Lars Knudsen’s Square Peg.

CJ handles global sales on the remake, which is likely to stir up a bidding war among distributors both in the US and internationally.

The 2003 original is an intricate cult favourite about an eccentric beekeeper who kidnaps a wealthy businessman, believing him to be an alien with plans to destroy Earth.

The businessman recognises his captor as a disgruntled former employee and plots his escape. Meanwhile a detective suspects the kidnapper may have struck before, with deadly results.

“One thing we learned from our success with Parasite is that audiences globally are excited to see genre-bending films with big themes,” said Lee. “Jang is a master of this in his own right, and we’re so glad to be working alongside Ari, Lars, and Will to help translate what made the original so special to an English language version that feels relevant to what’s going on today.”

Aster and Knudsen added, “Swinging with youthful abandon between white-knuckle suspense, absurd slapstick, grim horror and a deeply felt (and earned) sense of tragedy, Save The Green Planet! is one of the most remarkable films to come out of South Korea – among this recent wave or any wave, for that matter.

“When we heard that director Jang was passionate about revisiting this iconic work, bringing it to the US and updating it to reflect the mess of the world today (which feels even more ripe for this kind of apocalyptic skewering than when the film was first released), we leapt at the chance to be a part of it. We’re honored to be partnering with CJ and with the brilliant director Jang.”

CJ Entertainment’s upcoming films include Extreme Job, which is one of two collaborations with Kevin Hart and Universal Pictures on English-language remakes of South Korean hits, the other being Bye, Bye, Bye based on Sunny.