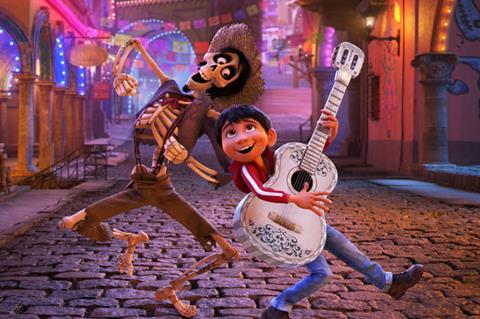 A competitive weekend at the UK box office saw Disney Pixar’s latest animation Coco land in first place. The film started its run with a Fri-Sun total of £3.35m, adding to previews for a non-final official debut of £5.25m.

In terms of more recent Pixar releases, Coco is ahead of Cars 3 - which took £2.63m when it opened in a busy family market alongside Despicable Me 3 and Spider-Man: Homecoming in July 2017 - despite the former being an original property and the latter being the third entry in a franchise. Cars 3 remains the lowest Pixar opening in the UK.

Finding Dory, which opened in the UK in July 2016, started with £8.12m in July 2016 and closed on £43m, an unrealistic target for Coco. A more appropriate comparison would be Disney’s non-Pixar animation Moana, a film based on similarly culturally-specific themes (Moana was set among a Pacific tribe, while Coco is based on the Mexican holiday of the Day of the Dead), which opened in December 2016 to £2.34m and went on to gross £20.44m.

Following a £4.04m opening last weekend, Darkest Hour fell a slim 19% this Fri-Sun, adding £3.27m Fri-Sun to sit second in the chart, a whisker behind topper Coco. After decent midweek takings, the film is up to £10.16m and will almost certainly surpass Pride & Prejudice (on £14.57m) to become Joe Wright’s highest-grossing title in the UK, particularly if it fulfils its awards season promise.

Steven Spielberg’s The Post, based on the true story of The Washington Post’s publishing of the infamous Pentagon Papers, landed with £2.15m from 551 sites, an average of £3,902.

Boasting an A-list cast of Meryl Streep and Tom Hanks (five Oscars between them), appearing together in the same film for the first time, eOne might have been hoping for a bigger number, but a crowded market restricted the figure to the lower end of Spielberg openings. On the list, it slots in between A.I. Artifical Intelligence (£2.29m) and Bridge Of Spies (£1.68m). The latter went on to gross £7.65m in the UK, a figure that The Post will be hoping to surpass.

In its fourth week, The Greatest Showman recorded a hugely impressive hold, falling only 2% to £2.1m this weekend. The film still played in 521 sites and now sits on £16.83m to-date.

Jumanji: Welcome To The Jungle dropped to fifth this weekend in a competitive marketplace. The film still recorded a strong hold, falling only 24% to £1.8m for a cume of £32.4m. By next weekend, it could become Sony’s seventh highest-grossing title in the UK, with Spiderman 3’s £33.55m well within its sights.

Insidious: The Last Key dropped 44% in its second week, taking a little over £1m for £3.6m to-date. By next week, it should have surpassed the third film in the series, Insidious: Chapter 3, which closed on £3.87m.

Looking at further Neeson-starring action titles, it’s also a better opening than A Walk Among The Tombstones (£1.32m) and the original Taken (£1.17m), though some way behind the latter’s sequels.

Looking forward, The Commuter is likely to finish up somewhere between A Walk Among The Tombstones’ final gross of £3.73m, and Unknown’s final figure of £6.6m.

Event cinema release Romeo And Juliet, live from Moscow’s Bolshoi ballet, took a non-final £164,772 from its 166 sites across a one-day release on Sunday (Jan 22).

Documentary feature The Final Year, which chronicles the last 12 months of Barack Obama’s presidency, opened to £18,430 from 10 sites. Including previews, the film sits on £37,318.

Philipe Garrel’s Lover For A Day played on four sites this weekend, taking £3,648, and will go a little wider this week.