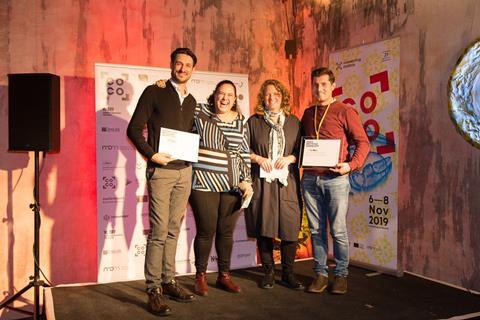 It is being produced by Sergiu Cumatrenco Jr and Ion Bors and will mark Bors’ feature directorial debut. The award includes a cash prize of €1,500 and free accreditation to the Producers Network at the Marche du Film in Cannes 2020.

The absurdist road movie, set during the armed conflict in Transnistria in the early 1990s, had been selected after winning the Transilvania Pitch Stop coco Award in Cluj in June.

It marked the producing duo’s second consecutive year in Cottbus after Bors’ short film One Less One More at the FilmFestival Cottbus last year.

The Avanpost Pitch Packaging Award went to Turkish project Athlete from co-directors Semih Gülen and Mustafa Emin Büyükcoskun. The prize includes in-kind services worth up to €15,000.

This first feature focuses on a young and ambitious female weightlifter who decides to dope in an unorthodox way - by getting pregnant - in a bid to secure the lifetime allowance provided by the Turkish government to medallists in international competitions.

Nicolescu decided to award an additional prize on his company’s behalf to apocalyptic sci-fi project Vesper Seeds by Lithuania’s Kristina Buozyte and her French co-director Bruno Samper. The pair have previously worked together on projects including The Collectress, sci-fi Vanishing Waves and VR animation Trail Of Angels.

This year saw the MIDPOINT training and networking platform offer script consultancies to three of the coco projects: Russian director Mikhail Borodin’s drama Convenience Store, about slavery in contemporary Russia; Israeli filmmaker Ram Nehari’s second feature, the coming-of-age drama No Land For Me, which had previously been pitched at the Sofia Meetings in March; and Polish director Justyna Mytnik’s Wet Monday, a fantasy drama with comedic elements, which was presented at the Polish Days in Wroclaw in July.

In addition, six works in progress from the region were presented at the event’s East-West market to an audience of sales agents, distributors and festival programmers.