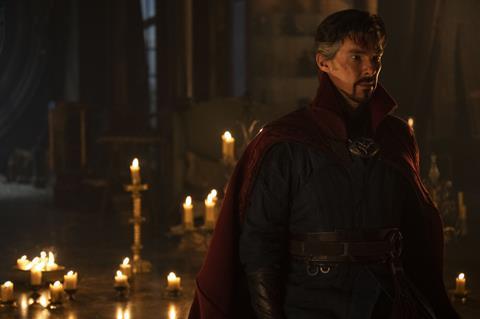 Disney’s Doctor Strange In The Multiverse Of Madness easily held on to the top spot at the UK-Ireland box office, grossing £5.7m in its second weekend.

Its box office total now stands at £30.4m, meaning that the sequel has already surpassed the £23.2m that the first Doctor Strange took in 2016. Ticket sales for Multiverse dropped 62% in its second weekend.

Elsewhere, Universal’s Downton Abbey held on to second place in its third weekend, falling 40% on its previous session to add another £970,000 and bring its total to £10.4m.

Daniel Kwan and Daniel Scheinert’s adventure comedy Everything Everywhere All At Once starring Michelle Yeoh took third place for A24, generating £681,351 over its opening weekend from 148 sites.

Three other holdovers followed: Paramount’s The Lost City, earned £348,000, bringing it to £9.3 million after five weekends; Universal animation The Bad Guys generated £ 304,695 on seventh weekend for a £11.4 million total so far; and Warner Bros’ Fantastic Beasts: The Secrets of Dumbledore scored £268,338 in its sixth weekend, helping its total to hit £20 million mark.

Universal’s launch of Blumhouse horror Firestarter largely failed to set the box office alight. The film about a young girl who has the power to set things on fire with her mind debuted over the weekend with £250,006.

Irish filmmaker Colm Bairéad’s debut feature The Quiet Girl, which launched to acclaim in the Generation section at the 2022 Berlinale, opened in 89 locations – 60 in Ireland and 29 in the UK. Released through Breakout Pictures, it grossed £73,601 over its first weekend. Previews added another £11,580, taking its cume to £85,190.

Elsewhere, Bollywood distributor Dreamz Entertainment opened action title Sarkaru Vaari Paata in 53 sites. Depicting a series of Indian banking scams, it took £72,815 over the weekend. The film launched on 11 May with £68,891, helping its first week cume to £178,543.

Sony opened Rosalind Ross’ religious drama Father Stu in 205 locations. But the Mark Wahlberg film to convert many audiences, taking £48,000. Its total stands at £60,000 when previews are factored in.

Trafalgar Releasing continued screenings of Andrew Dominik’s second Nick Cave documentary This Much I Know To Be True in 47 sites. Having opened with £121,260 on May 11, its total stood at £153,579 by the end of the weekend.

Picturehouse Entertainment launched Gaspar Noé’s Vortex in 32 locations, where it generated £12,000 over the weekend. The film, which debuted in the Cannes Premiere strand at last year’s festival, took £25,000 including previews.

Meanwhile, Joachim Trier’s The Worst Person in the World, released by Mubi, crossed the £1m box office milestone thanks to a £10,321 haul in its eighth weekend.