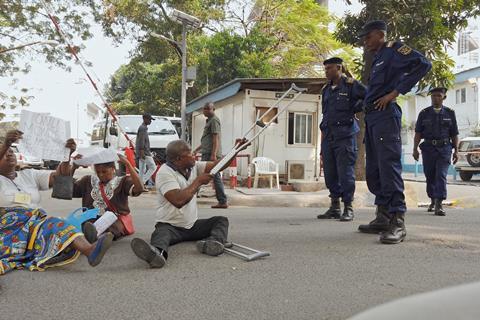 The co-production between the Democratic Republic of Congo, France and Belgium centres on a group of disabled civilians setting off on a long journey to Kinshasa to demand compensation for the injuries suffered during the so-called Six Day War between Ugandan and Rwandan troops in 2000.

The film, selected for this year’s Cannes Film Festival and given a special mention by the Amplify Voices Award jury when it was shown in Toronto in September, also received the prize of the Interreligious Jury in Leipzig. International sales are handled by France’s Andanafilms.

The Silver Dove for the best long documentary or animated film by an up-and-coming director was awarded to Argentinian co-directors Laura Citarella and Mercedes Halfon for The Poets Visit Juana Bignozzi about a young poet’s ambition to pass on Bignozzi’s artistic legacy.

Mayye Zayed’s Danish-Egyptian-German co-production Lift Like A Girl following a teenage Egyptian girl’s journey to the top league in weightlifting was presented with the Golden Dove by the jury for the German competition for long documentary and animated film.

Two prizes were awarded in the ‘Golden Section’, the newly created audience award competition for long and short documentaries or animated films, with the Golden Dove going to Czech director Jindřich Andrš’ feature documentary A New Shift and the Silver Dove to the Chinese-French animated short Step Into The River by Weijia Ma.

A New Shift was also awarded the MDR Film Prize for an outstanding Eastern European film. Andrš’ portrait of a miner retraining as a programmer after 21 years down the mines had received the Silver Eye Award for best documentary of the East Silver Market when the parallel Jih.lava International Documentary Film Festival announced its winners in an online ceremony 24 hours earlier on Saturday evening (Nov 1).

The other awards presented this year - the first under the new artistic director Christoph Terhechte - included the Fipresci International Critics Prize to the animation feature Vicenta by Argentina’s Dario Doria, the Goethe Institut Documentary Film Prize for Martina Priessner’s The Guardian, and the Young Eyes Film Award to Dustin Lose’s short Operation Moonbird which shows a European merchant ship refusing to help a refugee boat in trouble in the Mediterranean Sea.

The festival’s parallel industry platform DOK Industry announced the winners of two prizes for new documentary projects participating in the DOK Co-Pro Market and a prize for a work-in-progress presented in the DOK Preview Germany on October 27.

The Saxon State Minister for the Arts’ Development Prize for best female director went to the independent Taiwanese filmmaker Fan Wu who was at the co-production market in Leipzig with her debut XiXi.

Wu’s project participated in this year’s edition of the CIRCLE – Women Doc Accelerator training programme whose third module was held during DOK Leipzig.

Zonta Club Leipzig-Elster’s female talent development prize was given to the Colombian-born producer Jenifer de la Rosa for her project The Daughter Of The Volcano which is being planned as a co-production between Spain and Colombia.

And postproduction services worth €10,000 were awarded by D-Facto Motion Works to Udi Nir and Sagi Bornstein’s Viral which was one of eight works-in-progress showing footage in DOK Preview Germany.

The German-Israeli co-production with Gebrüder Beetz Filmproduktion follows the lives of six protagonists throughout the period of one year, covering the time before, during, and after the height of the Coronavirus outbreak by using their unfiltered and authentic material on YouTube.

Sunday’s award ceremony for the Golden and Silver Doves was broadcast live online and for a select audience in one of the cinemas in Leipzig.

All of the winning films as well as several other titles from the festival programme will now continue to be available online after DOK Leipzig has finished until 14 November.