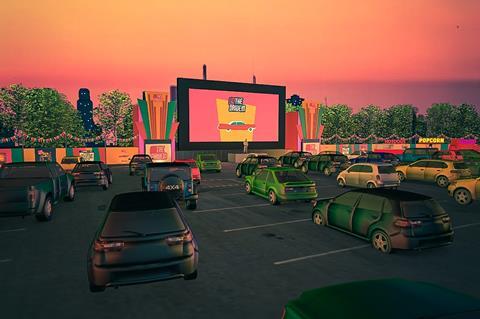 Source: At The Drive In

The recent boom in drive-in cinemas will continue beyond the Covid-19 pandemic, suggests a leading executive at US distributor Neon.

“I do think [drive-ins] will become a part of the typical theatrical footprint,” said Jeff Deutchman, executive vice president of acquisitions and production, at Neon. “A lot of people have discovered the pleasure of the drive-in that had never experienced it previously. I think it is something that will hold over from this experience.”

Deutchman was speaking on a virtual panel at Cannes’ Marché du Film Online, discussing ‘fresh ideas for reaching audiences’ in a year that has seen cinemas shut down around the world and the adoption of innovative approaches to release films.

Neon moved to launch Matt Wolf’s timely quarantine experiment documentary Spaceship Earth at US drive-ins and through pop-up cityscape projections as well as through the websites of theatres and small businesses such as restaurants and bookstores. In total, Neon enlisted more than 250 partners.

“We decided to use this time to experiment and not let a crisis go to waste, so to speak,” added Deutchman.

The UK has also seen the launch of drive-ins during cinema closures. “It’s very exciting and something that traditionally hasn’t necessarily worked in the UK, but we feel really positive about it,” said Nicola Pearcey, UK and EMEA strategy and operations president at Lionsgate.

Lionsgate launched ticket sales this week – alongside Disney and Studiocanal – for drive-in events through immersive film experience pioneer Secret Cinema. From July 5, it will see films such as Knives Out, The Hunger Games and Dirty Dancing screened at Goodwood Motor Circuit.

“We cannot wait for cinemas to be back up and running… but we also want to be able to test, challenge and try new opportunities,” added Pearcey. “It’s about the right films being in the right places for the right audience.”

Deutchman also said the use of virtual cinemas, while 5,500 theatres in the US remain closed, created an opportunity to forge closer relationships with audiences. “The most exciting thing that has come out of the virtual cinema experience for us as a distributor is that each transaction comes with an email address,” he said.

“It’s been incredibly useful and powerful for us to have that direct-to-consumer relationship that we don’t usually have the luxury of. Cultivating that relationship with your audience directly is extremely important… Our hope is that everyone takes that power really seriously to cultivate the audience when theatres come back.” 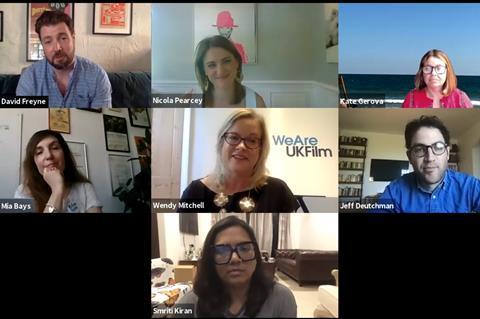 The panel also included Smriti Kiran, artistic director of the Jio MAMI Mumbai Film Festival, who discussed their own innovation during the pandemic, joining online collaboration We Are One: A Global Film Festival.

But asked if she believed a physical version of her festival would go ahead in November this year as planned, she shook her head and said: “It’s better to shift to next year than do any part of the festival just for the sake of it. It’s not going to benefit anyone. We’ve not officially taken that call but… if you hold a festival and it’s not safe… I don’t think it’s ethically ok.

“Everybody wants to get out of the house and it’s a very difficult time for everybody. But if we hold the festival, I’ll be at a cinema telling people to come to that cinema. Is that responsible? It’s a question I need to answer.”

Kiran added that Covid-19 numbers are rising in India and that cinemas may not reopen until December, despite current plans for August.

“I don’t think India will open theatres because our numbers are rising and may cross the US in August or September,” she warned. “We are sitting on a pile of bodies and the situation is not getting any better so cinemas will be the last to open.

“It means that most of the streaming platforms are trying to cut massive deals with commercial films and the cinema lobby is fighting those deals because they feel these films should wait for cinemas to open.

“But cinemas will be the last things to open. The plans were for August but I don’t think they will reopen until October or even December in India.”