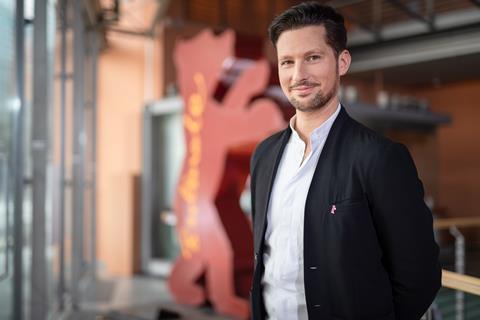 The decision by the Berlinale’s European Film Market (EFM) to move online due to rising Covid cases in Germany has forced the international industry to tear up its original plans for the February event. Buyers and sellers are now working out how to navigate a digital EFM at the same time as a reconfigured physical festival aims to go ahead in the German capital.

We heard from companies trying to book stands that the EFM’s exhibition space was fully booked as of December 2021. The decision to move the market online must have been a tough one.
This reflected the great need of the sales industry to meet physically, and that’s why the decision to move the market online was an extremely difficult one to make. Before we had to make this decision, we figured out the best solutions for exhibitors with the uncertainties of the time. Just to give an example, we pushed our deadlines for ordering stand equipment to the very last minute and found a way with our suppliers to have cancellation deadlines in January. Therefore, specific costs haven’t been created. We kept the financial risk for the exhibitors as low as possible.

How is the EFM handling refunds?
For all exhibitors who contracted an onsite exhibition space with us, we will issue a full refund except for the fee for the online participation. Our team is contacting the exhibitors to discuss the reversal.

Will clients get a full refund?
Yes, except for the fee for their online participation.

Are they offered a special deal on digital attendance?
Yes, we’re offering the early bear [sic] rates for their early commitment.

What are the prices for a virtual booth as well as a simple attendance?
The virtual booth prices vary depending on the level of services, but the rates are reasonable and are not comparable with physical attendance. The regular rate of an Online Market Badge is €159 ($182), giving access to the full market spanning virtual stands, online screenings, the participants guide and our conference programme, the EFM Industry Sessions.

We’re hearing a lot of sales agents and producers, especially those with films in the selection, are still planning to head to Berlin. Will EFM provide any meeting spaces or smaller scale networking opportunities?
We are currently exploring the safe offers we can make for sales agents and producers with films in the Berlinale line-up in accordance with the strict protocol of the festival in its revised concept. The strong need to grant access to distributors finding their way to Berlin is of course taken into account.

In terms of the official online market screenings for professionals, what will the schedule be? Will all the festival films be available for online professional viewing and will this be before their official premiere?
We [have] offered screening slots to all right-holders of films selected for the various festival sections and their reactions are very positive. We are confident about being able to present the majority of festival-selected films in the form of online market screenings. The first market screening is usually connected to the premiere date in the festival.

All market screenings will be programmed according to the established screening plan and can be accessed within a 120-minute time window after the designated start time. All market participants determine their own time zone. The film starting time will be based on the determined local time, ensuring that users in say, Australia, Central Europe or the US West Coast can view specific screenings at the same local time. This screening format preserves the momentum of a market presentation. For the first time, selected market screenings will be available in the form of a VoD offer after the regular EFM until March 8, 2022, so that participants can catch up after the market.

How many films will screen in the market?
We already scheduled more than 500 films and are still accepting bookings for online screenings. It’s still too early to state the final number, but so far the number of scheduled films indicates a satisfying offer.

Last year you had around 12,000 participants coming online each day. Now you’ve had time to analyse the data in more depth, can you say where they were based and also give an indication of your sense of interest out of Asia and the Americas this year?
The biggest group of online participants came from Germany last year, followed by the US and the UK. For Asia, Japan and South Korea and China were prominently participating. From South America, participants from Brazil and Argentina were high in numbers. When we look on the online accreditation stats so far, I would not predict big shifts.

The EFM’s dates of February 10-17 mean the market is slightly longer than the festival’s core programme of official selection premieres, running February 10-16. What is the thinking behind this?
The festival will still be held from February 10-20. The premiere presentations will wrap up on the day of the awards ceremony on February 16, but screenings will continue afterwards. Due to the EFM’s close connection to the festival, our market screenings are intertwined with the premiere screenings. Keeping the initial dates makes sense for the EFM.

Last year’s online EFM ran from Monday to Friday. This year, it will take place over a weekend. Is there an appetite among industry professionals to work online over the weekend?
Last year, screenings programmed in the evenings had higher-than-average ‘admissions’. On that basis, we’re confident that the appetite for films is there even over the weekend. When it comes to the conference programme, we’ve decided to have the live open panels during the week and will go for more closed sessions with smaller groups over the weekend.

On the basis of last year’s experiences, what are you and your team tweaking or changing?
Our online offers have been improved and further developed in reaction to the feedback we gathered from our previous edition. For example, we have restructured the rights management for online screenings and enhanced the usability, also for stand-holders.

Last year the EFM held 90 separate online sessions covering keynotes, round tables and podcasts. Will the programme be as extensive this year?
We’ve reorganised our conference programme, rebranding it the ‘EFM Industry Sessions’. Under this new concept, we’ve introduced four programme strands: ‘Producers’, ‘Distribution’, ‘Documentary’ and ‘Series’. This should provide easier orientation. In terms of topics, we set the core themes of ‘Future, Diversity & Inclusion’ and ‘Sustainable Development’, providing an editorial line.

Within the new ‘EFM Industry Sessions’ concept, we’ve found a way to align all open talk formats under one key topic, ‘Shaping Change’. We will offer around 25 open talk formats and will also add networking formats, one-on-one meetings with experts and podcast sessions etc. It may be a bit less extensive than last year, but there will be a suitable number of high-quality sessions in total.

Do you plan to hold physical screenings in Melbourne, Sao Paulo, Tokyo and Mexico City as you did last year?
The physical screenings which we held in various cities outside of Europe were successful for the films presented. This was a pilot project and one lesson we learned was that it would make even more sense to create a kind of a market hub in those cities, providing a basic market infrastructure to support those films. We will work on this idea but for this edition, we will skip the physical screenings abroad