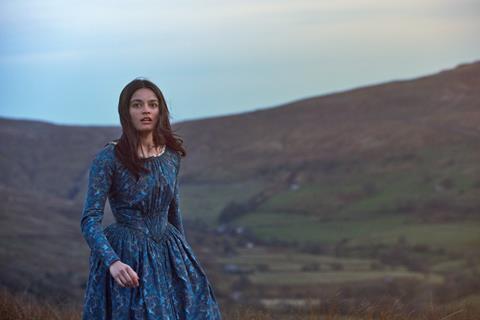 UK-based Embankment, which is executive producing and arranging financing, has pre-sold the drama to Warner Bros. for the UK and Wild Bunch for France, Germany and Switzerland as well as Italy and Spain through their subsidiaries BIM and Vertigo. Further deals include Portugal (Nos), Benelux (Cineart), Scandinavia (Scanbox), Greece (Spentzos), Israel (United King), Middle East (Front Row), South Africa (Filmfinity), and Australia and New Zealand (Madman).

Joining the cast alongside the previously announced Emma Mackey and Fionn Whitehead (who play Emily Brontë and her brother Branwell) are Oliver Jackson-Cohen, Alexandra Dowling, Amelia Gething, Gemma Jones and Adrian Dunbar. Both Mackey (who was today nominated for a Bafta TV award for her role in Netflix series Sex Education) and Whitehead are former Screen Stars of Tomorrow.

Filming has now begun in the north of England on Emily and a first look at Mackey in the role has been released (see above). The actress will next be seen in Disney/20th Century Studios release Death On The Nile.

O’Connor, who also wrote the script, is a two-time Golden Globe nominated actress whose credits include Mansfield Park, A.I. Artificial Intelligence and The Conjuring 2. Producers are David Barron and Piers Tempest with Robert Connolly and Robert Patterson of Arenamedia. Funding is from Ingenious Media, with Peter Touche as an executive producer, and from Spitfire Audio Holdings, The Post Republic and Tempo.