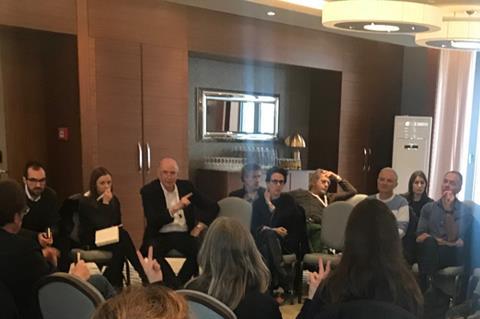 “The studios have been using AI for a while but the technology has yet to be widely explored by Europe’s independent film production scene,” explained Alexandra Lebret, managing director of the EPC which gathers some 100 top producers from across Europe.

Under the initiative, EPC is asking members to submit upcoming features at either the script, rough-cut, or fine cut stage for analysis by Largo using its dedicated AI tools.

EPC members who have already signed up for the trial include Marc Missonnier at Paris-based Moana Films, Alvaro Longaria at Madrid-based Morena Films, Andrea Occhipinti at Rome-based Lucky Red and Hubert Toint at Brussels-based Saga Films.

Lausanne-based Largo has analysed the scripts of nearly 20,000 feature films to build its AI programmes. Up until now its focus has been mainly on US studio-style productions but the company wants to expand its activities into Europe’s independent production scene.

Largo founder and CEO Sami Arpa presented his company’s AI software at EPC’s annual meeting on the fringes of the Berlinale on Saturday (February 22). He showed how the software had predicted the Oscar success and strong cinematography of Roma on the basis of the script alone, without any mention of its director and writer Alfonso Cuaron.

”The big players like Netflix and Amazon use data-related intelligence, in a way which makes them very successful. One big problem for independent producers is that they don’t have access to this data and they can’t create similar tools on their own. We want to offer a solution to this,” said Arpa.

The presentation provoked some debate among the producers in the room as to whether its widespread use would make it harder to get more original and idiosyncratic projects off the ground but overall the response was positive.

“It really depends on how it’s used. For producers trying to get private investment on board it could be helpful for assessing the risk but I don’t think it should be the only deciding factor,” said Pablo Iraola of Portuguese company Ukbar Filmes.

Lebret said the EPC and Largo had originally planned to kick-off their collaboration with a focus on nine projects but the enthusiastic response to the presentation meant they were considering expanding their collaboration and their original agreement.

“I thought there might be a bit more pushback but the response was very enthusiastic so now we’re thinking about other ways we can collaborate,” she said.

She noted, for example, that a number of members were open to the idea of sharing scripts with Largo to help it enrich its database and make it even more in tune with independent European productions going forward.