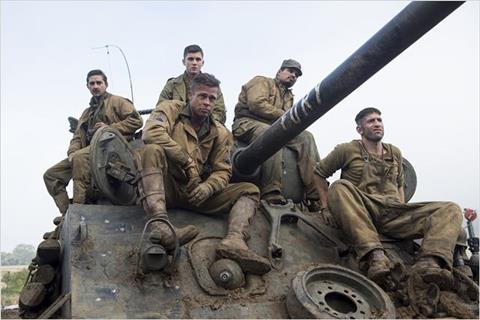 Having closed the BFI London Film Festival last week, Fury opened in style at the UK box office as it shelled Teenage Mutant Ninja Turtles off the top spot.

The result means that Fury is already director David Ayer’s best-ever UK performer, outgrossing End of Watch’s $3m (£1.9m) result. It could be set for a strong holdover this coming week as counter-programming to Halloween’s batch of horrors.

It may have slipped from the top spot, but Teenage Mutant Ninja Turtles enjoyed a solid second weekend of $3.1m (£1.9m).

With a lack of direct competition, Teenage Mutant Ninja Turtles could prosper over this week’s school holidays and potentially cross £10m by the weekend.

Also for Fox, The Book of Life opened with a solid, if unspectacular, debut of $1.6m (£980,986) from its 537 sites. With no new family openings over the half term, the animation should thrive over the coming days.

Landing one week ahead of Halloween, well-received horror The Babadook possessed $557,000 (£345,862) from its 147 sites through Icon Film Distribution. That marks a decent site average of $3,788 (£2,353) and good word-of-mouth should set it up for a fruitful Halloween period.

Also for Universal, Dracula Untold has bitten into $7.6m (£4.74m) after four weeks in play.

The Way He Looks, Brazil’s submission for Best Foreign Language Film at the Oscars, recorded a non-final UK bow of $5,100 (£3,151) from its six sites, mostly playing on split screens across the weekend.