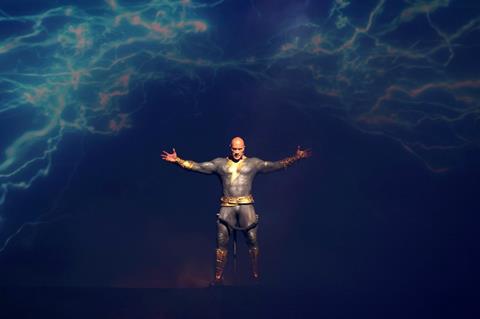 Marvel Studios president Kevin Feige used the return of in-person Comic-Con in its traditional late July berth to outline the vision for Phases 5 and 6 at the hit-making studio and was joined by other household names over the convention’s three days.

Dwayne Johnson turned up to promote Warner Bros’ October release of Black Adam, and there were equally enthusiastic receptions in the hallowed Hall H of San Diego Convention Center for Amazon Studios’ imminent $1bn The Lord Of The Rings: The Rings Of Power prequel series, HBO’s prequel series House Of The Dragon, and Netflix’s The Sandman, among others.

Below Screen highlights some of the key take-aways from 2022 Comic-Con, which ran from July 21-24.

On stage, Feige revealed his timeline chart (in the run-up to the next Disney earnings call in early August). It contained names both familiar and unfamiliar, beloved franchises and one in particular that has filmmakers have not gotten right in two previous attempts, Fantastic Four. That title still needs a new director after Jon Watts departed will launch Phase 6 and production is scheduled to kick off next year in time for a November 8, 2024, release.

Phase 4 will end later this year with Wakanda Forever, Ryan Coogler’s emotional follow-up to the $1.3bn 2018 global hit which starred the late Chadwick Boseman and opens on November 11. Letitia Wright, Danai Gurira, Lupita Nyong’o, Winston Duke and Martin Freeman return alongside Michaela Cole and Tenoch Huerta, who was introduced as Namor aka Sub-Mariner.

Previously announced for 2023 are Disney+ summer series Echo and Loki Season 2; autumn show Ironheart; and Agatha: Coven Of Chaos, which begins filming later this year in time for a winter release. Also coming next year are The Marvels directed by Nia DaCosta and starring Brie Larson on July 28; and Blade, which begins shooting this October and opens on November 3.

Avengers: The Kang Dynasty opens on May 2, 2025, and Avengers: Secret Wars on November 7, 2025. These are Phase 6 titles alongside Fantastic Four. They will be followed by four Untitled Marvel place-holders scheduled for 2026. The Russo brothers, whose last two Avengers tentpoles in 2018 and 2019 grossed more than $4.8bn worldwide, are not directing these latest Avengers tentpoles, although they and Feige have said they want to collaborate again.

Comic-Con mainstay Dwayne Johnson likes to make an entrance in Hall H and did not disappoint, rising up on a dais in full costume as the antihero with imagery of lightning streaking around him. New Line/DC Films’ Black Adam opens on October 21 and tells of a powerful entity who rises up and is pursued by Justice Society of America. He was originally portrayed in the DC Comics as an enemy of Captain Marvel. ’ Pierce Brosnan and Aldis Hodge are among the cast and there is a Viola Davis cameo. This has been a passion project for Johnson for more than a decade and the star worked on it with director Jaume Collet-Serra for the past five years. There was also footage from Shazam: Power Of The Gods, which opens on December 21 and stars Zachary Levi, Helen Mirren, Rachel Zegler, and Lucy Liu.

’The Lord Of The Rings: The Rings Of Power’ wows Hall H

The upcoming fantasy adventure show was one of the stars of Comic-Con. Amazon Studios, which has reportedly invested $1bn so far in the series, brought an orchestra to Hall H and select talent spoke about what to expect. The studio dropped a trailer ahead of the September 2 debut on Prime Video. The action takes place in the Second Age of Middle Earth, some 2,000 years prior to events in J.R.R. Tolkien’s The Lord Of The Rings. The series is inspired by notes Tolkien appended to his Lord Of The Rings books as well as The Silmarillion. Morfydd Clark, Owain Arthur, Robert Aramayo, Markella Kavenagh, Ismael Cruz Cordova and Charles Edward are among the cast.

Neil Gaiman, the British author whose lauded graphic novel series has been adapted into a 10-episode series by Netflix, took to the stage to talk up the fantasy project. The story centres on sibling gods and their interactions with one another, the cosmos, and humans. At the dark heart of it all is the titular character Morpheus the lord of dreams, played by Tom Sturridge. Produced by Warner Bros Television, the series debuts on Netflix on August 5 and also stars Vivienne Acheampong, Charles Dance, Joely Richardson, Stephen Fry, David Thewlis, Asim Chaudhry and Mark Hamill. Gaiman told Hall H he would like to see an adaptation of his Elizabethan comics series Marvel 1602.

’House Of The Dragon’ boasts plenty of dragons

HBO’s Game Of Thrones prequel series House Of The Dragon got a plug and while there was neither exclusive news nor previously unseen footage, that didn’t detract much from the general air of excitement. Author George R.R. Martin was on hand to discuss the series, which is based on his book Fire And Blood. The series is set 200 years prior to events in Game Of Thrones and explores the history of House Targaryen, a time when there were dragons galore. The cast includes Matt Smith, Olivia Cooke, Rhys Ifans, Emma D’Arcy and Paddy Considine. House Of The Dragon debuts on August 21.