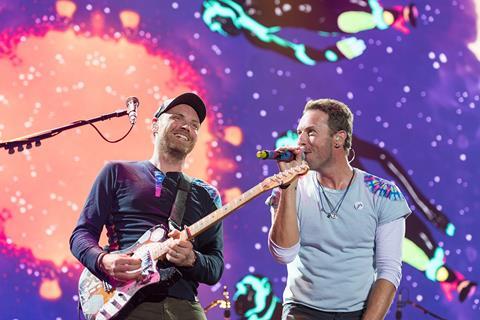 Event cinema specialists Trafalgar Releasing have set a UK cinema release for Glastonbury Presents – Live At Worthy Farm, a  livestream on May 22 of live sets from artists from the site of Glastonbury Festival.

UK-based Trafalgar Releasing, a subsidiary of Trafalgar Entertainment, is distributing the event in over 350 cinemas in partnership with promoter and online ticket producer Driift.

With the physical edition of the Glastonbury Festival cancelled for a second year in a row due to the pandemic, the Glastonbury Presents event will feature sets from artists including Coldplay, Damon Albarn, HAIM, Wolf Alice, Idles, Jorja Smith, Kano and Michael Kiwanuka. The sets will take place on the Worthy Farm site in Somerset, with further  performances during the live show.

The musical acts will be interspersed by a spoken word narrative guiding viewers on a journey through the valley where the festival typically takes place.

“As a national moment with some of the biggest acts in music, we are excited to be part of this unmissable celebration, allowing audiences to experience the event on the big screen and support their local cinemas,” said Trafalgar Releasing CEO Marc Allenby.

The event will financially support Glastonbury Festival’s three main charity partners – Oxfam, Greenpeace and WaterAid – as well as helping to secure the return of the physical festival for 2022.

The release will land in UK cinemas on the first weekend after venues have reopened in England, Scotland and Wales. Other titles on release heading in to that first weekend including Lionsgate’s Spiral: From The Book Of Saw; Oscar winners Nomadland (Disney), Minari (Altitude) and Sound Of Metal (Vertigo); and Sony’s Peter Rabbit 2: The Runaway.

Trafalgar has also promoted Alice De Rosa to COO. De Rosa, who joined the company in 2011, had been director of distribution since 2017. She will continue to be responsible for day-to-day management of all distribution projects.