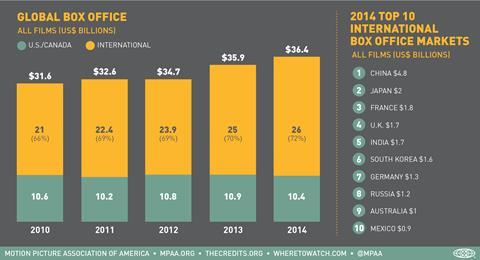 Global box office receipts increased 1% in 2014 to set a new record of $36.4bn, according to the MPAA’s annual Theatrical Market Statistics Report.

Growth was driven by the Asia Pacific region, which was up by 12% overall, including China which increased by 34% and became the first international market to exceed $4bn in box office, reaching $4.8bn overall.

“In the past few years, more people than ever before around the world are going to their local cinemas to see movies made by filmmakers in the United States and all around the globe,” commented MPAA Chairman and CEO Senator Chris Dodd.

“This is not just an American story of success, but a worldwide story about the value of craft, creativity and the importance of a story well told. We tell stories that transcend borders and transform individual experiences into shared ones. 2014 was a strong year, and 2015 is starting out tremendously, with box office in the US/Canada up 11 percent in the first two months of this year.”

Cinema screens increased by 6% worldwide in 2014 to over 142,000, again due largely to continued growth in the Asia Pacific region (+15%). Over 90% of the world’s cinema screens are now digital.