“He is one of our own”: UK film industry responds to Ben Roberts taking CEO role at BFI 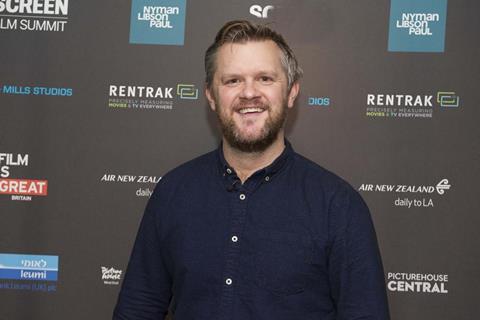 Figures from the production, sales and distribution sectors of the UK film industry have given a positive response to the news (confirmed today) of the appointment of Ben Roberts as chief executive of the BFI.

“[His appointment] equips the BFI for a very challenging future as the lead organisation of our industry. We are in the midst of enormous change precipitated by the streaming revolution. All of the indications are that there is an opportunity for us to seriously expand our output and our productivity…we need the BFI to be fully fit for purpose in order to make the most of that opportunity.”

Rose Garnett, director of BBC Films, said: “What great news. Ben has been a fantastic partner to us as director of the Film Fund and more recently deputy CEO, and he is a really dynamic choice to lead the BFI through the challenges and opportunities that lie ahead. We’re thrilled - for him and the industry.”

Daniel Battsek, director of Film4, was equally fulsome. “Congratulations to Ben, and to the BFI for an excellent appointment. Ben’s knowledge and experience of the BFI and the wider British Film industry will be a significant asset as he steps up to CEO,” he said.

“He’ll take the reins at a pivotal moment in terms of balancing the needs of the UK’s indigenous independent production sector with the broader film and TV industry, fuelled by the recent inward investment generated boom. I’ve known Ben for a very long time and have always been impressed with his inclusiveness and ability to steer the big picture while also keeping an eye on the smaller details. I look forward to the next chapter in our working relationship.”

Producer Rebecca O’Brien of Sixteen Films said: ”As a UK producer I would certainly like him to focus on policy and opportunities for indigenous independent film as we lurch into the post-Brexit world. I think, however, that his priority must be to find a way to harmonise the different elements of the BFI so the institution can thrive both culturally and industrially. That would be no mean feat.”

She added: ”It goes without saying that he has a strong understanding of how the film industry works but he is also very well aware of the importance of the role with regard to the cultural remit of the organisation.  There’s a delicate balance in marrying the two and I think Ben has the sensitivity to be able to navigate both areas.”

“He is brilliant. He is such a progressive, creative executive,” said Hamish Moseley, managing director at Altitude Film Entertainment. “He has worked and excelled in every facet of the industry going back to cinemas in the 90s. He knows the UK and the international marketplace inside out. I think he will be a huge asset to the UK industry. It is good for us all. We have so many challenges we face right now. He is acutely aware of them and has the ability and the tools to help us all navigate them. He is a great ideas generator and he will help us find solutions to problems that we have and problems we don’t even know we yet have.”

These remarks were endorsed by Tim Richards, Vue CEO and a BFI board member involved in Roberts’ appointment. “From my perspective, it was a very difficult decision because we had so many strong candidates for the position. In the end, I think that Ben’s incredible experience and passion for both the BFI and the industry really told through. For me, he was the obvious choice to take the BFI forward.”

Roberts, Richards continued, “has a plan to take the BFI to the next level which I find very inspiring. He has a lot of very exciting ideas for what he wants to see the BFI accomplish over the next few years.” The Vue boss also expressed his confidence Roberts would be good for exhibition. “Ben is one of the most highly respected production executives in the industry. For us, he has always been a big fan of the big screen experience.”

Adrian Wootton, CEO of Film London and the British Film Commission, said of the appointment. “Obviously, [Roberts] understands the BFI and its partner relationships, its stakeholders in terms of public and private partners and government, very well. It’s really good to have someone leading the organisation who really does understand the industry, the culture of independent film and sales and distribution. It is very helpful to have someone leading the organisation who can work with us on the key issues, whether it’s studio space, inclusivity, skills, diversity, sustainability.”

Many figures in the industry underlined Roberts’ first-hand knowledge of almost every part of the film business value chain.

“He is one of our own,” said Charlie Bloye, chief executive of Film Export UK, the trade association that represents the UK’s independent sales companies. “That’s not to say he’s not even-handed. He has been tremendously good news for all the people in the value chain. As somebody who has formerly run a sales company, we do see him as one of our own. We are very thrilled he has been awarded the top job.”

“From our own point of view, we won’t have to go through a long explaining process which might have been the case if someone had come from the studio world or some other area that wasn’t at the coal face of international sales,” Bloye added.

Bloye’s remarks were echoed by those of Simon Crowe, chairman of Film Export UK and M-D of SC Films. “We are excited as an organisation. Ben has worked in international sales and distribution and understands our position in this business - the difficulties and challenges we face. Hopefully, the BFI will understand our needs.”

Finally, Andy Leyshon, the new chief executive of Film Distributors’ Association, said: “I’ve known Ben for 20 years. During that time, the main thing that comes across is his absolute passion for film. That is completely undimmed in all that time. It is good that he has spent time at the coal face of distribution. Ben is already a great asset to the BFI. Now, under his leadership, I am sure he will continue Amanda’s great work and drive the organisation on to even high levels of excellence.”