Hollywood steels itself as Sony pushes ‘Morbius’ to October 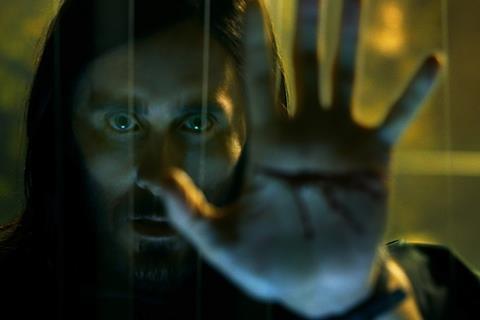 As Covid cases surge in the US and the vaccine roll-out falls behind schedule, Sony/Columbia Pictures has pushed its Marvel Entertainment adaptation Morbius from March 19 to October 8 of this year.

Jared Leto stars as a biochemist who inadvertently becomes a vampire when he tries to cure his rare blood disease. The cast includes Michael Keaton and Tyrese Gibson.

Daniel Espinosa directed from a screenplay by Matt Sazama and Burk Sharpless.

The pandemic was expected to bring widespread suffering this winter, and more studios are understood to be likely to follow Sony and move films dated in the early part of this year.

The first major tentpole scheduled to open in 2021 is MGM/Eon’s James Bond adaptation No Time To Die, currently set for April 2.

Other studio releases lined up for the next month or so include Sony’s Cinderella on February 5, and Disney/20th Century Studio’s The King’s Man on March 12.

Were any of these films to get postponed, schedule changes are expected imminently before the studios sink more dollars into costly theatrical marketing campaigns.