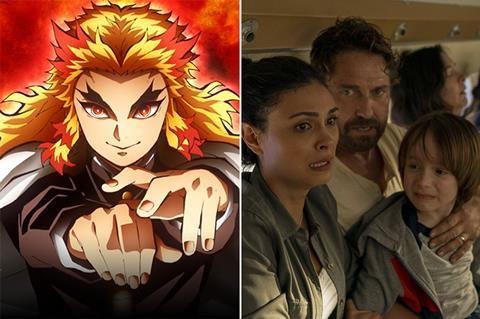 Japanese anime Demon Slayer The Movie: Mugen Train delivered a strong second session in Japan for joint distributors Toho and Aniplex – an estimated $37m for the weekend period, which is a decline of just 16% from the debut frame. The manga adaptation has rapidly built a total of $102.5m after just 10 days.

Mugen Train (aka Infinity Train) also delivered a stellar result for Imax, with second-weekend takings of $2.06m, down just 8% from the opening session. Total for Imax on the title after 10 days is $5.7m, which is 5.54% of the film’s total.

The film is adapted from Koyoharu Gotoge manga Demon Slayer: Kimetsu No Yaiba, having previously been adapted into a 2019 TV series. Both the series and the film are directed by Haruo Sotozaki.

Christopher Nolan’s Tenet grossed an estimated $3.3m in its ninth session internationally, down from $5.2m for the previous weekend. The decline of 44% is steeper than the 35-36% weekend-to-weekend drops witnessed recently.

International cumulative total for the Warner Bros release is now an estimated $289m, and the global tally (including North America) is $341m. Imax screens account for $32.7m internationally – ie 11% of the total.

Next territories to release Tenet are Brazil and Panama on October 29, with 18 more to follow, including Argentina, India, Indonesia and the Philippines.

Gerard Butler action thriller Greenland opened in two new international markets at the weekend – Germany and South Africa – topping the box office in both of them. In Germany, local distributor Tobis achieved an $897,000 debut from 517 sites with the title. In South Africa, the release into 106 locations was the widest since cinemas reopened in the region, achieving a debut of $68,000 including previews.

In Italy, Greenland grossed $278,000 for Lucky Red, achieving third place, behind two new releases: Vision Distribution’s Italian footballer documentary My Name Is Francesco Totti ($779,000 including previews) and Eagle Pictures’ Out Of My League (aka Sul Piu’ Bello, $388,000). In Italy, cinemas have been ordered closed again from today (Monday October 26).

In Germany, Greenland led the field ahead of two local family films: Warner Bros’ Jim Button And The Wild 13 ($577,000), and Constantin’s Dragon Rider ($424,000). Next come two titles from Studiocanal: local comedy Es is tzu Deinem Besten (which is a remake of 2017 Spanish comedy Es por tu bien, grossing $416,000) and family classic The Secret Garden ($393,000). Among these top five titles, the Jim Button sequel leads the field in terms of cumulative box office, with $5.31m after four weeks.

The estimated weekend total for Greenland was $1.94m, taking the international total to $33.6m. This coming weekend, the film opens in Austria and Swiss-speaking Germany.

Ric Roman Waugh (Butler’s Angel Has Fallen) directs the story of a family fighting for survival as a comet races to Earth.

Albert Dupontel directs, writes and stars (alongside Virginie Efira and Nicolas Marié) in Gaumont’s Bye Bye Morons, which led the field with 475,000 admissions. Next came Studiocanal’s 30 Jours Max with 382,000 – a 2% rise on its opening session. Universal’s Trolls World Tour rose by 20% to 336,000 admits for third place. SND’s Poly – the adventures of the titular Shetland pony, adapted from the novels by Cécile Aubry, and from Belle And Sébastien director Nicolas Vanier – landed in fourth place, with 334,000.

After We Collided stronger in Europe than in US

Voltage Pictures’ After We Collided grossed an estimated $1.01m internationally in its eighth session, bringing the international total to $47.5m. The film also opened in the US at the weekend via Open Road – simultaneously on VoD and in cinemas – achieving an estimated $420,000 from 460 sites, and eighth place in the domestic box office chart.

Last year, After – the first film to be adapted from Anna Todd’s novel series – grossed $12.1m of its $70m global total in North America. For the sequel, After We Collided enjoyed a regular theatrical release in Canada via VVS Film, grossing $1.22m so far. The day-and-date US release theatrically and on VoD will presumably hold back the cinema box office for After We Collided in the territory, but with a big win for online transactions.