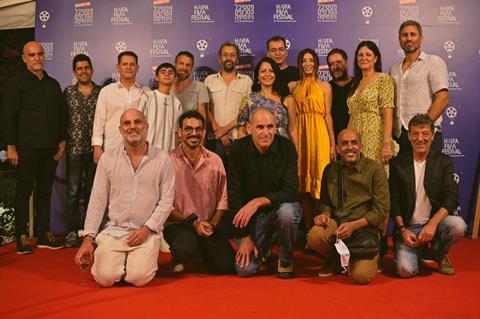 Israeli filmmaker Eran Kolirin’s new film Let It Be Morning had a contentious festival launch in Cannes this July after its mainly Palestinian cast led by Alex Bakri, Juna Suleiman and Salim Daw refused to attend the world premiere in Un Certain Regard.

They explained in a collective statement that their non-appearance was aimed at highlighting the “decades-long colonial campaign of ethnic cleansing… against the Palestinian people” and the “latest wave of violence and dispossession.”

Three months later, in an unexpected turn of events, the production is now one of the frontrunners to be Israel’s submission to the best international film category of the Oscars, with the full support of the cast.

In late August, it tied at the nomination stage with Avi Nesher’s Image Of Victory for the Israeli Academy Of Film and Television’s annual Ophir Awards with 15 nominations each, ahead of the ceremony on October 6. The winner of the best film at the Ophirs is traditionally Israel’s submission to the best international film category.

Other candidates include Dani Rosenberg’s The Death Of The Cinema And My Father Too, with nine nominations; Nadav Lapid’s Cannes Jury Prize winner Ahed’s Knee, with eight; and Gidi Dar’s feature animation Legend Of Destruction, with seven.

Adapted from the 2006 novel by celebrated Palestinian writer Sayed Kashua, comedy-drama Let It Be Morning revolves around a Palestinian village situated in Israel close to Jerusalem, that is suddenly cut off from the city by an unexplained army roadblock.

Its social drama tropes and touches of absurdist humour put the spotlight on the reality of the 1.9 million Palestinian citizens of Israel, who make up roughly 21% of the 9.3 million population.

As the academy’s voting process to decide the Ophir winners got underway this week (from September 27-October 1), the film was given a further boost when it swept the awards at the Haifa International Film Festival last Sunday (September 26), clinching the best film and screenplay awards for Kolirin and best-supporting actor for Ehab Elias Salami.

Kolirin’s  2007 comedy-drama The Band’s Visit was previously selected to represent Israel in the old foreign language category but was rejected by the Academy of Motion Picture Arts and Sciences because more than 50% of the dialogue was in English. The director hopes things will pan out differently this time around.

“Any film I do I want it to go as far as it can,” he told Screen International. “This specific film has a certain spirit that on a very simple level could touch people’s hearts, especially after these two years of global closure we’ve all been through. It takes this idea of siege and closure to another level, from the very personal to the very political to the very personal. It is of its time.”

The Haifa wins followed a packed Israeli premiere at the festival Friday evening (Sept 24) with a mixed Israeli and Palestinian audience in the presence of most of the cast, with lead actor Bakri, who is the nephew of celebrated Palestinian actor Mohammad Bakri, flying in from his current home of Germany.

Kolirin, who adapted Kashua’s novel with the writer’s full backing, acknowledges the fact that both the film and its Oscar push will likely spark debate, particularly around the questions of identity inherent in its storyline and production, but sees this as part and parcel of cinema.

“It’s a very unique sort of collaboration. I’m happy if people ask questions. That’s what film is for,” he says.