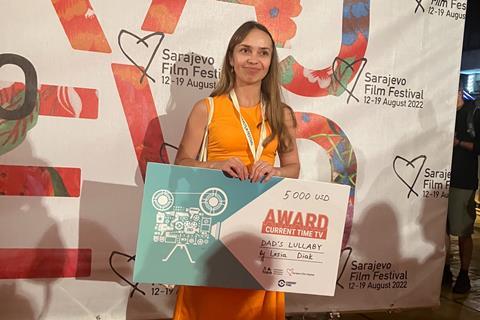 Ji.hlava International Documentary Film Festival has selected 18 participants for the 2023 edition of its Emerging Producers scheme, which it has launched this week at Sarajevo Film Festival.

The festival has also awarded two prizes in Sarajevo’s CineLink Industry Days, as part of the Docu Talents from the East selection.

The Docu Talent Award, with $5,000 prize, was awarded to Ukranian feature Dad’s Lullaby, directed and produced by Lesia Diak. Shot since 2014, the film centres on a Ukrainian soldier who returns from the frontline and struggles to readjust to family life. The jury described the title, which is currently in post-production, as “a heartfelt depiction of a life under impossible circumstances. Such a personal story is a valuable way to understand the scars of the ongoing invasion of Ukraine.”

The Distribution Award, with €3,000 in-kind prize, went to Romanian director Vlad Petri’s archive-constructed feature Between Revolutions, depicting the penpal friendship between an Iranian woman and a Romanian woman across the 1970s and 1980s, as both countries underwent their own revolutions.

The jury noted “a unique method of letter-reading to express a friendship that survives revolutions, regimes and time itself; and has relevance to a world that needs female solidarity as much as ever today.”

The two films were chosen from nine films, all in different stages of post-production.

The 18 names on the 2023 Emerging Producers list include Ireland’s Roisin Geraghty, who is in post-production on Claire Dix’s Screen Ireland-backed feature Sunlight, produced by Blinder Films.

The selection includes 17 European producers each year, with one from a guest country; this year’s guest participant is Qatari producer Nouf Al Sulaiti.

The selected producers will participate in two workshops – at Ji.hlava in October 2022 and the Berlinale in 2023 – as well as receiving networking, educational and promotional support throughout the year.