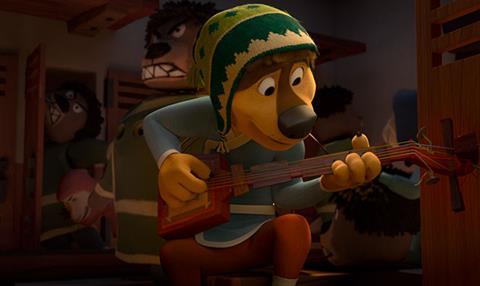 Co-founder and CEO of Altitude Film Entertainment Will Clarke commented, “Following the great response to the film at the BFI London Film Festival, we’re looking forward to introducing this to a wider UK audience.” The film marks Altitude’s first theatrical animation acquistion.

Ralph Kamp, chairman and CEO of the film’s sales agent Timeless Films, commented, “From the very first screening, [Altitude’s] enthusiasm and passion for the film made it clear to us they would be the perfect distribution partner. We hope the film will become a big success in the UK and look forward to the release next year.”

Based on a graphic novel by Chinese rockstar Zheng Jun, Rock Dog tells the story of Bodi, a Tibetan Mastiff expected to become the next village guard to a group of sheep, but fears he doesn’t have the passion to assume the role from his dad.

When a radio falls out of the sky and Bodi hears a rock song, he leaves home to chase his musical destiny in the big city. However, when he attracts the attention of a hungry wolf, Bodi must save his family and friends without giving up his newfound dream.

Rock Dog is directed by Ash Brannon, the Oscar-nominated director of Surf’s Up and co-director of Toy Story 2. The film is produced by Amber Wang, Joyce Lou, David B. Miller, Rob Feng, and Zheng Jun.