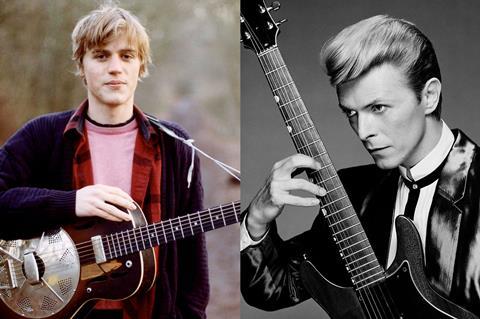 The Emmy award-winning filmmaker Gabriel Range, whose feature credits include I Am Slave and Death Of A President, is directing from a script written by Christopher Bell. It is being produced by Paul Van Carter and Nick Taussig of London-based Salon Pictures and is set to shoot, mainly in the US, in June.

Film Constellation has boarded world rights and will introduce the film to buyers at the European Film Market in Berlin in February.

Stardust will chronicle the young David Bowie’s first visit to the US in 1971 – a trip that inspired the invention of his iconic alter ego Ziggy Stardust. It will chart his transformation into one of the most iconic and boundary-pushing superstars in music history.

The project will feature a wide soundtrack including certain Bowie performances. It is being positioned as a “moment in time” feature in the vein of My Week With Marilyn, rather than a biopic of David Bowie.

“Johnny Flynn is one of the UK’s most talented emerging actors, and a musician in his own right,” said Van Carter of Salon Pictures on the casting. Salon’s recent credits include the double-Bafta nominated documentary McQueen and Churchill, starring Brian Cox.

Flynn is now starring with Kit Harrington in Sam Shepherd’s stage play True West, which is playing in London’s West End until late February. He was a Screen UK Star of Tomorrow in 2005 and rose to international prominence following his lead turn in Michael Pearce’s Beast, alongside Jessie Buckley, last year.

His further credits include TV series Les Misérables and Vanity Fair, and Nat Geo’s Genius, for which he has garnered a Critic’s Choice nomination. He will next be seen in Working Title’s upcoming Jane Austen adaptation Emma with Anya Taylor-Joy.