The Daily Show host will be joined by political journalist Maziar Bahari at the Screen Talk event. 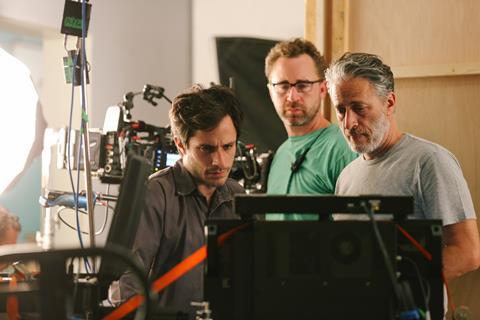 The BFI London Film Festival (Oct 8-19) has added a Screen Talk with The Daily Show host Jon Stewart and political journalist Maziar Bahari discussing the important roles of journalism and satire in upholding freedom of speech.

The Debate Talk will take place on Oct 12 after the European premiere of Stewart’s directorial debut, Rosewater.

The film is based on the real-life ordeal of London-based journalist Bahari. In June 2009, Bahari - played by Gael Garcia Bernal - returned to his homeland of Iran to report for the BBC on the elections and to interview Mir-Hossein Mousavi, the prime candidate running against Ahmadinejad.

Finding himself embroiled in the maelstrom of unrest that followed Ahmadinejad’s victory declaration, Bahari covered the action from the streets of Tehran, sending footage of the protests back to the BBC.

The morning after filing this material, he was arrested by the Revolutionary Guard on a charge of treason and incarcerated in Evin prison where he was held for 118 days.

The film recreates events leading up to Bahari’s arrest and his emotional and intellectual struggle to survive.

Other Screen Talks at the festival will include Foxcatcher director Bennett Miller (Oct 17) and Timbuktu director Abderrahmane Sissako (Oct 11).